Rethinking the Smart City: Interventions for a Post-Digital Age 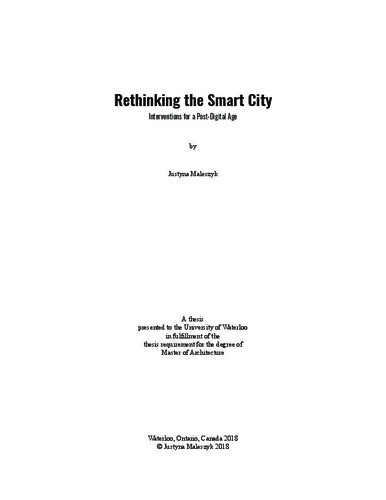 The term Smart City is quickly gaining traction, as it spreads across global cities in a series of urban initiatives. When depicted in mass media, Smart City developments are often portrayed as idealistic technological initiatives with sensors, intelligent traffic signals, autonomous vehicles and interactive screens – an ambiguous extension of the personal digital tools our society relies on for daily convenience and connectivity. They hold the idealistic promise of efficiency, innovation, dependability, security and sustainability, and in the words of Google’s Sidewalk Lab: an “[improved] quality of life” for all. Architect Rem Koolhaas describes these technological trends as movements preoccupied with the improvements they bring, and often disregarding the experiences lost in the process. In reality, Smart City projects are much less concerned with user-experience and are driven instead by the potential for data collection and optimized consumerism. Historian Antoine Picon, argues that the engagement of large technology businesses in the Smart City discourse is motivated almost exclusively by the opportunity for collection and governance of data, and the resulting avenues for profit. By deploying city-wide digital infrastructures, companies like IBM, Cisco, Panasonic, Siemens and Google, are gaining the ability to commercially benefit from the data collected from our spending habits, social media use, means of transportation, energy consumption, etc. The impact of digital tools on urban communities is engaging researchers in the fields of psychology and sociology, whose findings are leading to an increased concern with the way social media and personal media devices are depreciating the strength of our non-digital communities and relationships. Twentieth century sociologists such as Georg Simmel, Ray Oldenburg, and Lewis Mumford, argued half a century ago the challenges technology has and continues to impose on their development. In response to some of these challenges, contemporary architects and designers are encouraging us to rethink our relationship to the digital city. Understanding this reality, my research questions the paradox and promised success of cities planned by profit seeking companies, versus city planners. The thesis seeks to examine a new form of reflective interpersonal engagement in the digital age, by shifting the exchange dynamic between technology companies and users. Through a series of design interventions, the thesis asks if one can create meaningful human interaction in digitally saturated environments. Leveraging Smart City technology, a series of interventions interrupt the absentminded, habitual use of digital technologies in order to augment the presence of individual agency within the public realm.