Navigating through peaks and valleys: Public space and water infrastructure as intervention tools for urban regeneration in Kigali, Rwanda 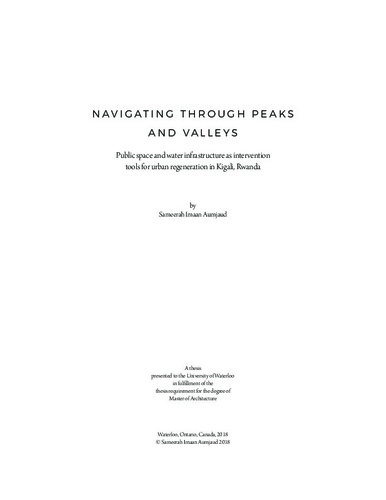 Current methods of urban regeneration, more specifically as practiced in Rwanda, are totally devoid of socially inclusive approaches, and highly lack contextual adaptability. In the aftermath of the genocide of 1994, which plundered the country's resources and human capita, Rwanda has undergone various states of reconstruction - socially, economically and architecturally. Over the past two decades, Kigali, Rwanda’s capital city, has been building up its momentum of development towards translating itself into a dynamic urban hub, aiming at attracting foreign investors to boost the local economy. In 2007, the government adopted the Kigali Conceptual Master Plan, branding Kigali as a city of character, vibrant economy and diversity. Since then, various alterations of the masterplan have been issued. Today, Kigali’s skyline is dominated by steel, glass and concrete megastructures, in the image of 'modernity'. However, these efforts at transforming Kigali into a city anchored on Western standards are completely disconnected from the current socio-cultural, ecological and economic dynamics. The masterplan promotes the annihilation of the informal areas within the city, which account for the dwelling area of 66% of Kigali's population. It also dismisses the undulating topography and communal significance of Kigali's wetlands to informal dwellers. Consequently, the latter remain deeply vulnerable, constantly living under the fear of being evicted or relocated, while the wetland valleys, currently under serious ecological threat, are destined to be converted into parks reserved for the elite. Through the critique of current methods and proposals of urban revitalisation, this thesis advocates for a more inclusive approach to urban planning, and promotes urban development lying in the interest of every strata of Rwandan society. The work dwells into how wetlands can be utilised as a backbone for urban revitalisation by optimising the potential of Kigali’s watershed to provide adequate infrastructure that consolidates existing community relationships. The juxtaposition of ecology, infrastructure and architecture opens the possibilities for various patterns of incremental growth, while remaining sensitive to the social, environmental and cultural dimensions of the urban fabric. The design strategy proposes a framework supporting enhanced livability based on the dimensions of society, economy, biodiversity, and sustainable development. The framework is explored through three nodes, each with its own specific challenges, and focusses primarily on restoring water quality and wetland ecology through a decentralised, human-centric set of interventions. This work also showcases how the framework allows for continuous growth in the medium and long term, remaining in complete synchronisation with the altering dynamics of Kigali's emerging society. In contexts like Rwanda, where peace and conflict are sensitive and controversial matters, this thesis demonstrates how design can not only build communities and trigger tenacious social relations, but also how it can act as a gentle and subversive form of questioning the status quo.