Implementation of OFDM Encryption and a New Frequency Hopping System 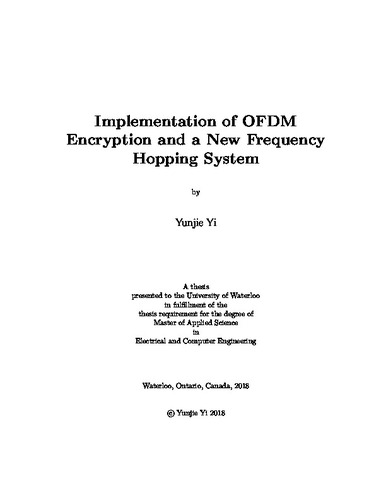 As the rapid growth of wireless communication, physical layer security becomes important recently. Unlike wired transmissions, the nature of wireless transmissions makes the transmitted signals over the channel easily to be eavesdropped and jammed by malicious adversaries. The eavesdropper posts a significant threat to the privacy of public people, and the jamming attack blocks the wireless transmission. Therefore, privacy and reliability of the wireless communication system are easily compromised compared to the wired communication system. Consequently, wireless network security has attracted public attention in the recent years. Wireless networks can be secured in all layers of a network protocol stack which include application, transport, network, data link and physical layers. This thesis focuses on the physical layer security in wireless communication. Specifically, the physical layer security we are focusing on has two significant branches which are orthogonal frequency-division multiplexing (OFDM) related security system and frequency hopping (FH) system. The former one is to prevent transmitting information from stealing, and the latter one focuses on preventing jamming attacks. It is commonly known that OFDM is widely used in wireless communication systems, including WIFI and cellular system. In the first part of this thesis, we use software defined radio to implement an existing OFDM encryption scheme called OFDM Enc in IEEE 802.11a standard, and the implementations are done in microwave anechoic chamber and laboratory environment separately. Based on the implementation performed in the GNU radio, we find a multipath boundary in the OFDM Enc. In the second part of this thesis, we propose a new FH system named randomly selective m-sequence based BLADES system. Specifically, the collision properties of two distinct binary primitive polynomials of the same degree for the new FH system have been analysed and simulated.