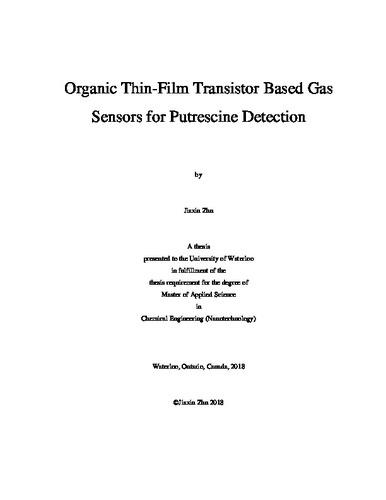 The application of organic thin film transistors (OTFTs) has been progressing in the area of sensors for decades now. For accomplishing gas sensing in ambient conditions, polymers with good air stability and high enough mobility to detect environmental variations by analytes exposure are required for the OTFT-sensors. In this work, putrescine (PUT) was selected as our primary analyte, as it has high volatility and can be emitted by decayed food products. OTFT-based sensors were made with various polymers as semiconductors to detect PUT vapor. Based on the preliminary study of gas sensing with bottom-gate, bottom-contact (BGBC) OTFTs, a gas sensing system was established with OTFT-sensors, an analyte injection platform and a signal analyzing system, which is presented in Chapter 3. Before and after gas detection, all OTFT devices were characterized by their charge carrier mobility, threshold voltage and current on/off ratio in the glovebox and in air. Additional tests on polymer films were conducted by morphology and crystallinity tests with AFM and XRD. Chapter 4 and Chapter 5 show the screening of polymers as the semiconductor in OTFT sensors. P-type polymers and n-type polymers including commercially available ones and those synthesized by our group were employed in OTFT-sensors. P3HT and N2200 as typical p-type and n-type representatives have succeeded in the detection of PUT vapor as OTFT sensors. In addition, p-type polymers with FTPDO, DPP, indigo and bithiazole cores, n-type polymers with IBDF building block also showed sensing ability towards PUT vapor as OTFT sensors. Chapter 5 especially focuses on a series of 1,4-DPP polymers that exhibited high transistor performance as well as good air stability. As main factors that determine the performance of a sensor, operational temperature, stability, response and recovery time, sensitivity and selectivity of these DPP-polymer sensors showed very promising potential in PUT vapor detection. Food spoilage detection was realized with three types of DPP-sensors to detect vapors emitted by food samples. Mechanism of DPP-sensors to detect PUT vapor was studied by responses of the sensor, IV characteristics of the device, and morphology/crystallinity of the polymer. Combined with chemical properties of DPP-polymers and putrescine molecules, it was proposed that the trapping effect of lone pairs of electrons on putrescine molecules would cause the responses of DPP-OTFT sensors. Mobility dropping, drain-source current decrease and negative shift of VTH were observed with DPP-sensors by this trapping effect with the diffused PUT in the active channel. Future steps are expected based on this study. Better sensing ability can be achieved with the improvement on both transistors quality and polymers properties. More accurate relationships between sensors responses and PUT vapor concentrations can be built by optimizing gas sensing process. Spoilage detection of food products with OTFT sensors can be improved for more precise analysis with assistance of liquid chromatography (LC) and gas chromatography (GC). The ultimate goal of this study is to manufacture smart labels or tags with OTFT-sensors to attach on food packages, by connecting to smartphones or computers, fulfilling a real-time, in-situ detection of PUT vapor with ideal accuracy.