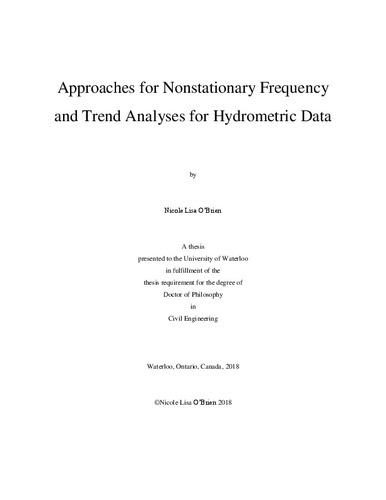 Peak hydrometeorological events have been the topic of much concern in recent years, chiefly their frequency and magnitude. According to the Fifth Assessment Report by the Intergovernmental Panel on Climate Change (IPCC), land-surface temperatures have increased in the 20th and early 21st centuries and more extreme precipitation events are expect in this warmer climate. Furthermore, land-use changes can have a pronounced effect on the hydrologic regime. The subsequent changes in streamflow and precipitation data over time can introduce nonstationarity in the time series data, resulting in data that are not independently and identically distributed (IID). Significant trends, change-points, and serial correlation identified in time series data may invalidate the IID assumption, therefore, in these instances, more complex statistical techniques must be employed. The first contribution of this thesis focuses on the development of a trend centered pooling approach. The most commonly used pooled frequency analysis techniques do not account for nonstationarity in the pooling group member data, however, nonstationarity must be accounted for if it is detected in the time series data. This approach pools data based on the form of trend found in the at-site data. Therefore all sites are assessed for trend before regionalization and each pooling group is created with members having similar forms of statistically significant trend (either increasing or decreasing). A case study is carried out on four homogeneous regions in different hydroclimatological regions in Canada. Using the trend centered technique and the four pooling groups, peak 50- and 100-year nonstationary quantiles are estimated. An uncertainty analysis of the examined regions indicates that there is less uncertainty in the nonstationary quantiles when compared to their stationary counterparts, thus reinforcing the effectiveness of this nonstationary regional frequency analysis technique. This thesis additionally presents a peaks-over-threshold approach that makes use of covariate-dependent stationary and nonstationary thresholds. The generalized Pareto (GP) distribution is fit to threshold exceedance data using covariate-dependent location and scale parameters. Bivariate and multivariate models are used for both the threshold and GP models. The methodology is applied to precipitation data from 30 meteorological stations in coastal British Columbia (BC) due to the potential for climate change effects in the region. 50-year quantile estimates and their associated uncertainty are calculated, indicating that there is stronger evidence of stationarity, however numerous stations show nonstationary behaviour. A comparative trend analysis is also carried out on the frequency and magnitude of stationary threshold exceedance events for the winter and summer seasons for the 1976-2014 and 1986-2014 time periods. The results from this analysis indicate that statistically and globally significant trends are present in the threshold exceedance and frequency of peak data. The final contribution of this thesis focuses on the presence of serial correlation in hydrometeorological data. If autocorrelation is detected in time series data, standard nonparametric trend detection tests can produce erroneous results. Therefore, numerous techniques have been developed to account for detected serial correlation to improve trend detection accuracy. Several tests have previously undertaken the task of assessing the power and type I error rates of existing techniques, however, there has been little focus on negative serial correlation. Furthermore, a large number of the existing techniques assume the data to have an autoregressive lag-1 (AR(1)) memory structure, an assumption that is not consistently applicable. Accordingly, this research compares the power and type I error rates of various existing statistical techniques that account for positive and negative autocorrelation when used in combination with the Mann-Kendall nonparametric trend test. Using instantaneous peak data from a subset of southern Ontario watersheds, differences in the serial structure of the block maxima series (BMS) and peaks-over-threshold (POT) data are elucidated. It is determined that BMS data are more likely to have significant negative lag-1 serial correlation and are more likely to have AR(1) memory structures; positive significant autocorrelation is more commonly found in POT data. It is determined that the block bootstrap (BBS), the Hamed and Rao (1998) variance correction technique (VCCF1), and the sieve bootstrap (SBS) are the most powerful techniques in the presence of positive autocorrelation. Alternatively, the VCCF1 and BBS techniques are most appropriate when significant negative serial correlation is present. A comparative trend analysis is also undertaken on the same study area in which trends are assessed based on the land-use in the catchments of interest. The included land-use classifications include agricultural, natural, RHBN, and urban; trends in several hydrological characteristics are assessed. Differences in the detected trends using POT and BMS data are also revealed. Trends are identified in the natural and RHBN watersheds; however, there is a lack of consistency between those detected in the BMS and POT data. Furthermore, numerous statistically and globally significant trends are identified in the urban and agricultural catchments. The overall contributions of this research include the development of a novel trend centered pooling approach for regional frequency analysis, the development of a covariate-dependent threshold selection methodology for at-site frequency analysis, and the comparison of the memory structure of BMS and POT data. Additionally, the effects of negative serial correlation on the type I error rates and power of numerous statistical techniques developed for use with nonparametric trend tests are elucidated.