Untold History, the Museum of Toronto 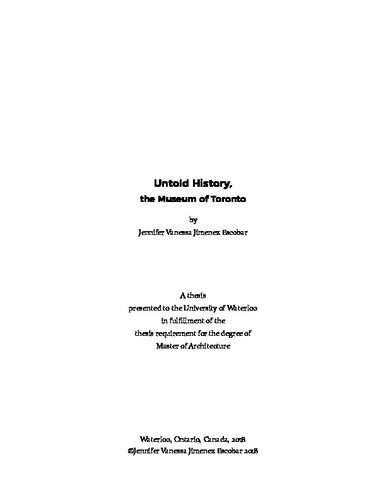 From its role in the fur trade in the 17th century to the multicultural city that it is today, the City of Toronto has evolved significantly over time. This thesis attempted to build a container to recognize the city’s history through the design of a museum: ‘Museum of Toronto’. The project itself is located at the east end of the St. Lawrence neighbourhood, adjacent to the busy downtown core, where the first parliament of Upper Canada once stood. The museum is targeted to all Torontonians, including; all Canadians who choose to live in Toronto; immigrants who are looking for new places to call home; and children and youth who are curious to learn more about the city they live in. The design of the building began with explorations into the city’s history including its immigration policies. These historical narratives influenced the true purpose of the building both as a place to exhibit historical artifacts connected to the city’s development and also as a place of inclusion for newcomers. As such, the museum houses a mix of cultural institutions: a museum, theatre, library, and also a learning centre. The ‘Untold History’ refers to not only histories of the past, but also to histories of immigrants yet to come. The main goal of the design was to create a space that could simultaneously express the past and also be open to the possibilities of the future. The architecture itself addresses the complex functionality of a museum and the representation of memory through physical form while creating a place for integration and development of the community, to the newcomer, to the elderly and the children, but most importantly to open the eyes to the lake.