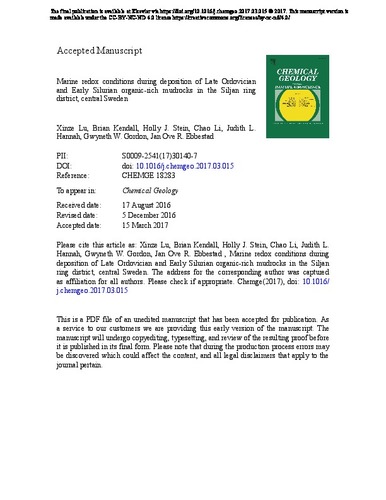 The Late Ordovician Period witnessed the second largest mass extinction in the Phanerozoic Eon and the Hirnantian glaciation. To infer ocean redox conditions across the Ordovician-Silurian transition, we measured the U (as δ238U relative to standard CRM145 = 0‰) and Mo (as δ98Mo relative to standard NIST SRM 3134 = +0.25‰) isotope compositions of 26 organic-rich mudrock samples from the Late Ordovician (Katian) Fjäcka Shale and the Early Silurian (Aeronian-Telychian) Kallholn Formation (Siljan ring district, Sweden). The magnitude of Re,Mo, and U enrichments, ReEF/MoEF and UEF/MoEF ratios, and sedimentary Fe speciation point to locally euxinic bottom water conditions during deposition of the Fjäcka Shale. The same proxies suggest that black shales of the Kallholn Formation were deposited under transiently euxinic conditions with the chemocline situated near the sediment-water interface, whereas gray shales stratigraphically equivalent to the upper Kallholn Formation were deposited from oxygenated bottom waters. These observations are consistent with higher δ98Mo and δ238U in the Fjäcka Shale compared with the Kallholn Formation. Because the Fjäcka Shalewas deposited from persistently euxinic bottomwaters, theMo and U isotope compositions from these rocks can be used to estimate the extent of global ocean euxinia and ocean anoxia (euxinic plus ferruginous conditions), respectively. Elevated MoEF and Mo/TOC ratios in the euxinic Fjäcka Shale suggest no more than moderate basin restriction from the open ocean as well as non-quantitative removal ofMo from the euxinic bottom waters, thus pointing toMo isotope fractionation between seawater and the euxinic sediments. Hence, we infer that even the highest δ98Mo(+1.28‰) preserved in the Fjäcka Shale is only aminimum estimate for theMoisotope composition of coeval global seawater. Correcting for seawater-sediment Mo isotope fractionation, the δ98Mo of late Katian seawater may have been +1.4–2.1‰, which corresponds to ~10–70% Mo removal into the euxinic sink. The average authigenic δ238U of the Fjäcka Shale is −0.05‰ to +0.02‰ after correcting for a range of possible detrital δ238U values, thus yielding an overall average of ~0‰. Taking into account isotope fractionation during U removal to euxinic sediments, we infer that late Katian seawater δ238U was about−0.85‰to−0.60‰. A steady-state U isotope mass balance model reveals that 46–63% of riverine U input was removed in anoxic settings. Based on the Mo and U isotope data, we infer that euxinic and anoxic waters may have covered b1% and at least 5% (potentially tens of percent) of the total seafloor area during the late Katian, respectively, based on previously publishedmodels that relate themagnitude of Mo and U burial fluxes to the areal extent of euxinic and anoxic seafloor. By comparison, only 0.21–0.35% and b1% of the total seafloor area was covered by anoxic waters today and during the Cenozoic, respectively. The difference between the estimated extent of ocean anoxia (euxinic plus ferruginous) and ocean euxinia points to an appreciable extent of ferruginous water masses during the late Katian. Integration of our data with previous studies thus supports the hypothesis that ocean oxygenation intensified during the subsequent Hirnantian glaciation (when seawater δ98Motemporarily reached values similar to today). Hence, environmental stresses related to glaciation, not an expansion of ocean anoxia,may have triggered the first phase of the Hirnantianmass extinction.