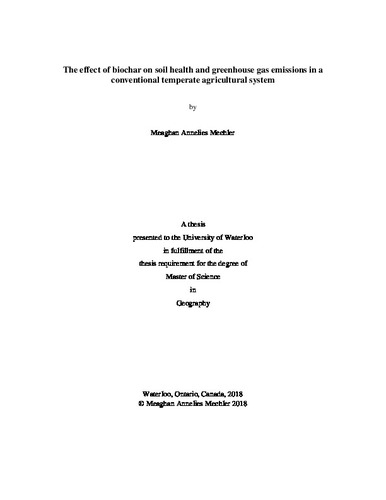 Biochar has been present in tropical agriculture as a soil amendment for millennia. Its ability to alter soil physical and chemical characteristics has been utilized to improve soil health and crop productivity. The use of biochar in temperate agricultural soils is a new concept, and has been practiced for about a decade. To date, few long-term field studies have quantified the temporal effects biochar has on soil health or greenhouse gas emissions (GHGs) of temperate agricultural soil. The objectives of this study were to quantify differences in soil characteristics of biochar and non-biochar amended soil, to determine the relationship between emissions and soil characteristics, and to determine temporal variations in GHG emissions in temperate agricultural soils following biochar additions. The treatments were (1) 6 t/ha poultry manure plus 135 kg/ha of nitrogen (urea) fertilizer (MN), (2) 3 t/ha poultry manure plus 3 t/ha biochar (MB) and (3) 3 t/ha poultry manure, 3 t/ha biochar plus 135 kg/ha fertilizer (MNB). It was found that the vast majority of analyzed attributes were unchanged by biochar additions. Soil moisture, temperature, and PO43- were however significantly greater (P<0.05) in the conventional treatment, while C/N ratios and light fraction distribution within the soil were temporarily altered by additions. Though not significant, biochar soils, MB and MNB, appeared favorable for corn yield and aboveground biomass accumulation (2016). The opposite effect was found for soybean yield (2017), although this was still not significant. Soil CO2 and N2O emissions were not significantly different (P<0.05) among the conventional treated soils and biochar-amended soils in 2016 and 2017. CO2 and N2O emission rates were similar in both field seasons. Results from this study revealed that a low biochar addition rate had few, or temporary impacts on soil health and greenhouse gas emissions.