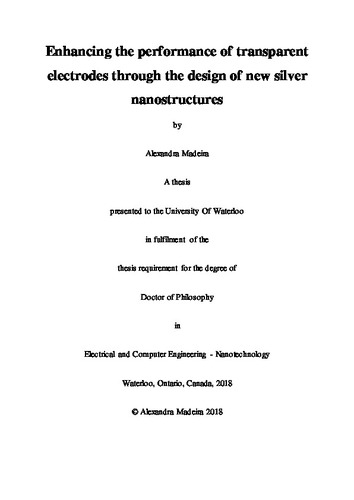 Transparent electrodes are a necessary component in a number of devices such as solar cells, flat panel displays, touch screens and light emitting diodes. The most commonly used transparent conductor, indium tin oxide (ITO), is expensive and brittle, the latter property making it inappropriate for up-and-coming flexible devices. Films consisting of random networks of solution-synthesized silver nanowires have emerged as a promising alternative to ITO. They have transparency and conductivity values better than competing new technologies (e.g. carbon nanotubes films, graphene, conductive polymers, etc.) and comparable to ITO. Furthermore, these silver nanowire films are cheap, flexible, and compatible with roll-to-roll deposition techniques. The main objectives of this PhD work are to improve the properties of silver nanowire electrodes and to study and solve issues that are currently hindering their use in commercial devices. Specifically, I studied the important areas of electrode conductivity and stability. To increase the conductivity of nanowire electrodes, two silver nanostructures different from what is commercially available were synthesized i) ultra-long nanowires and (ii) branched nanowires. Regarding (i), by using 1.2-propanediol as the medium rather than the typical ethylene glycol in the polyol synthesis process, as well as the molecular weight of PVP, the temperature of the process, or the concentration of silver nitrate, we obtained silver nanowires with an aspect ratio between their lengths and diameters of 1050. Among all the ultra-long silver nanowires elaborated in polyol process reported in the literature, they have the maximum length. The synthesis developed is also cheap and the reaction time takes less than 2h. Moreover, they have a high yield of 2 mg/ml. Electrodes with a sheet resistance of 5 Ω/Sq for a transparency of 94% were obtained (with post thermal treatment applied). However, this post-deposition anneal is shown to have a small influence on the decrease of the sheet resistance. It is thus not required to elaborate electrodes with good performance, which is very advantageous for the elaboration of electrodes on plastic substrates. Regarding (ii), “V-like shape” or “Y-like branched” nanowires were elaborated thanks to the input of ultrasonic irradiation during the polyol process. Unfortunately, their length being short (6 µm), their interest is limited to enhance the performance of transparent electrodes. In addition, structural analyses of both branched and unbranched nanowires revealed the nanostructures not monocrystalline. Concerning the stabilities issues, the thermal stability of silver nanowire electrodes coated with graphene was investigated. This coating allows a better homogeneity of the heat through the network, decreasing the number of hot spots and thus increasing the lifetime of the electrodes. The corrosion of silver nanowire and the resulting electrode resistance increase over time is a severe problem hindering their use in commercial devices. 11-mercaptoundecanoic acid (MuA) was identified as a promising passivation agent of silver nanowires. Lifetime testing showed that the electrode resistance increased more slowly (12%) than any other passivated electrodes reported in the literature. Furthermore, unlike many other passivation methods, the MuA molecule itself does not negatively affect the conductivity or transparency of the electrode and is very inexpensive, all contributing to the commercial viability of the passivation method.