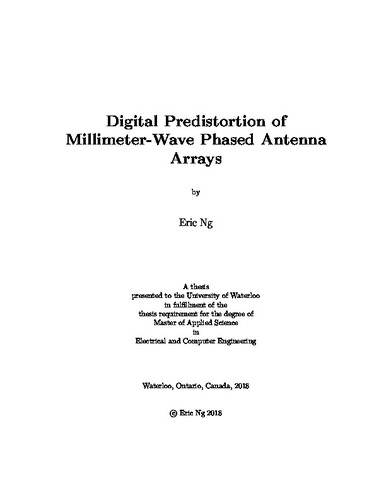 The cost of deployment of reliable, high-throughput, fifth-generation (5G) millimeter-wave (mm-wave) base stations will depend significantly on the maximum equivalent isotropically radiated power (EIRP) that the base stations can transmit. High EIRP can be generated using active beamforming antenna arrays with large apertures and driven by an array of power amplifiers (PAs). However, given the tight half-wavelength lattice that the arrays must retain to ensure a wide beam steering range, the achievable EIRP quickly becomes thermally-limited. Efficient power amplification is thus imperative to low-cost and reliable beamforming antenna array design. This work considers the application of Digital Predistortion (DPD) as an efficiency-enhancement technique for mm-wave beamforming antenna arrays. Two RF beamforming configurations were considered and corresponding DPD schemes were investigated. First, a single-input single-output (SISO) DPD is proposed that can linearize a single-user RF beamforming array in the presence of non-idealities such as PA load modulation and variation of phase shifter gain with phase. The SISO DPD relies on a feedback signal which reflects a coherent summation of the PA outputs. The SISO DPD is then validated by measurement of a 4-element and 64-element array at 28 GHz with 800 MHz modulated signals using a single over-the-air feedback signal. The SISO DPD uses different sets of coefficients to cope with changes in both linear and non-linear distortions as the beam is steered. Second, the SISO DPD formulation is extended to multi-user RF beamforming to linearize multiple sub-arrays. In this configuration, non-negligible inter-user interference can affect the DPD training. To address the interference, a linear estimate of the interference is calculated and canceled for each user before extracting the SISO DPD coefficients in each sub-array. The SISO DPD with interference cancellation is validated by measurement of a 2-user 2x64-element subarray hybrid at 28 GHz with 800 MHz modulated signals across different combinations of steering angles for the two users.