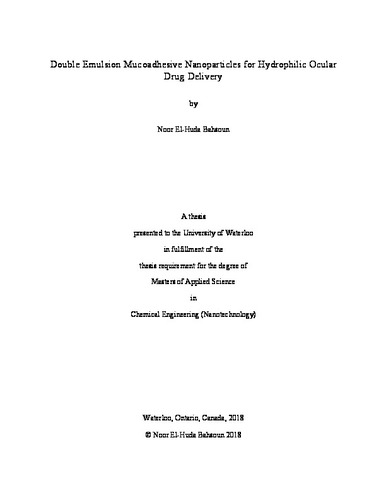 Common eye diseases such as conjunctivitis affect around 6 million people annually. Although eye drops are the most common treatment for these diseases, topical administration is limited by low ocular bioavailability due to lachrymal drainage, low drug permeability across the corneal epithelium, and low drug stability as a result of tear dilution and turnover. This results in over 95% of the drugs applied through eye drops to be quickly cleared away. Consequently, patients struggle with the multiple daily applications required and the resulting side effects. In order to overcome these barriers and to increase contact time of drugs on the surface of the eye, several nanoparticle (NP) technologies have been developed for the delivery of drugs to our systems like liposomes, hydrogels, microparticles, micelles, implants...etc. NP surfaces can be tuned to achieve specific properties such as binding affinity towards the ocular surface. NPs can also carry a large amount of drugs and release them in a sustained manner over a long period. Due to their small size, NPs do not cause abrasive sensations on the eye upon patient application. There is no one technology that is suitable for any drug to any site, however biodegradable colloidal systems appear to be the most advantageous. Their popularity stems from their biocompatibility with ocular tissues, high encapsulation efficiency, sustained release, and ability to degrade into non-toxic by-products that are safely cleared from ocular tissues. With these unique advantages, NP drug carriers may drastically improve patient compliance while reducing side effects. Research conducted in the Frank Gu Research Group suggests that NP drug carriers are capable of circumventing corneal clearance mechanisms by manipulating the surface functionalization of polymeric nanoparticles (NPs) such that they can interact with the ocular mucosa. In view of this background, this thesis was aimed at exploring the potential of mucoadhesive NPs (MNPs) to encapsulate hydrophilic drugs in the core of the NP, while maintaining mucoadhesive functionality in the shell of the NP. We developed a novel approach to formulate a double emulsion mucoadhesive nanoparticle (DE MNP) system to deliver hydrophilic molecules. Double emulsions allow us to generate a vesicle-like structure of hydrophilic interior and hydrophilic exterior and have been successful as nanoparticle drug carriers in the past. Most double emulsions utilize PLGA to make up the primary emulsion because it is a biodegradable and biocompatible polymer that has the ability to degrade into non-toxic by-products (lactic acid and glycolic acid) that are metabolized by the human body. The novelty in the DE MNP method involves using PLA-Dex-PBA in the outer emulsion, rather than common stabilizers such as PVA and Tween. The amphiphilic characteristics of PLA-Dex-PBA will arrange on the surface of PLGA emulsions with PLA facing the oil phase and Dex-PBA facing the exterior of the particle, making up the surface of DE MNPs. The PBA moieties on the surface of DE MNPs can covalently target the sialic acid moieties that are abundant on the ocular mucous membrane and avoid rapid clearance. DE MNPs form the foundation of the ocular drug delivery platform developed in this thesis, using fluorescein isothiocyanate dextran (FITC-Dex), a commercially used fluorescent dye, as the model drug to determine the capability of DE MNPs to encapsulate and release hydrophilic molecules. DE MNPs were first evaluated for size and morphology. They demonstrated sizes in the sub-200 nm range, nearly double the size of PLA-Dex-PBA MNP micelles. Their spherical shell/vesicle conformation was confirmed by static light scattering and TEM, and remained stable and unchanged with the addition of model FITC-Dex. DE MNPs demonstrated encapsulation of FITC-Dex up to 87 wt%, and sustained release for up to 7 days in vitro, showing their potential as a long-term eye drop delivery platform. In vitro mucoadhesion study as a proof of concept demonstration of PBA on DE MNPs’ surfaces was demonstrated by studying the binding kinetics of PBA to sialic acid through the Stern-Volmer equation. The KA value for DE MNPs with sialic acid was determined to be 107.83 M-1, which is far higher than the literature values for PBA-SA. This gave confidence to the presence of PBA on the surface of DE MNPs. Next, we proceeded to attempt to demonstrate this mucoadhesion using in vivo models. FITC-Dex was encapsulated in the NPs and administered to rabbit eyes to track its ocular retention. FITC-Dex delivered DE MNPs showed ocular retention for no longer than 3 hours on rabbit eyes; this trend was also seen for free FITC-Dex. Povidone-Iodine (PVP-I), an inexpensive and commercially available drug commonly used to treat ocular bacterial infections, was encapsulated and evaluated for bactericidal activity upon release from DE MNPs. DE MNPs revealed that that encapsulation of the drug did not change the properties of the drug, and also confirmed that the amount of drug being encapsulated (1% w/v) in DE MNPs, is a sufficient concentration to elicit antimicrobial activity, and better than current formulations such as Betadine® which uses 5%w/v PVP-I for treatment of ocular infection. This thesis demonstrates the development process of DE MNPs as topical ocular drug delivery systems for hydrophilic drugs. DE MNPs demonstrated delivery of a clinically relevant dosage of PVP-I, controlled release of therapeutics over prolonged period of time, and mucoadhesive properties in vitro. These DE mucoadhesive NPs show significant promise as a long-term topical ocular hydrophilic drug delivery system that significantly reduces the dose and the administration frequency of the eye drops while minimizing side effects.