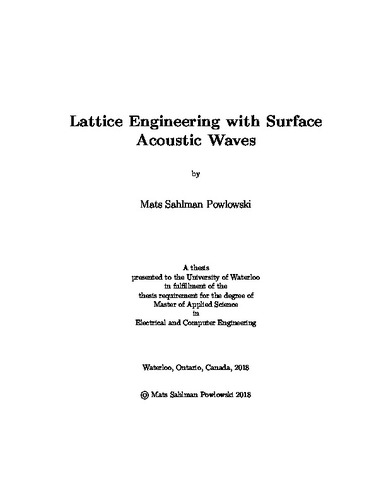 Quantum simulators are special purpose quantum computers designed to examine problems that are impossible to test with classical computers. They can be used to simulate problems in atomic physics, condensed matter physics, cosmology, high energy physics, nuclear physics and quantum chemistry, among other topics. In condensed matter physics, the simulators are composed of particles and a lattice structure containing the particles. This thesis considers the use of exciton-polaritons as particles and surface acoustic waves to form the lattice potential. Exciton-polaritons are quasiparticles formed by the coherent mixture of photons and excitons in a semiconductor, with properties that are a combination of both components. Lattices of exciton-polaritons can be made by controlling the potential landscape for either the excitons or the photons. This thesis covers two main topics: Surface acoustic waves are mechanical waves that propagate along the surface of a material. They can be simply generated via the inverse piezoelectric effect with interdigital transducers (IDTs) and can be designed to operate at frequencies, from several MHz to several GHz. They modulate the bandgap of the underlying material through the strain field that they carry, which can be used to trap excitons. The formation of potential landscapes for exciton-polaritons with surface acoustic waves has been demonstrated by another group, although their lattices were limited in scope. 1) I designed IDT layouts used to produce lattices that have not been previously demonstrated with surface acoustic waves. Numerical calculations were used to verify the validity of the design. Several pieces of test equipment both for the electrical and optical measurements were designed and built. 2) The designed devices were fabricated using both electron-beam and optical lithography and the quality of the resulting IDTs was quantified by S-parameter measurements. Observation of the lattices formed by the designed devices and the next steps required in implementing a quantum simulator are discussed.