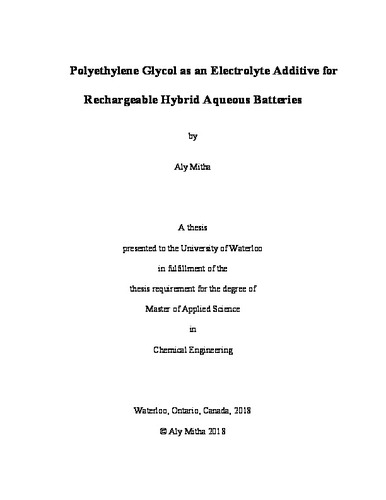 Climatic and environmental challenges arising from excessive greenhouse gas production from human activities have necessitated a serious shift towards sustainable and renewable sources of power such as solar, wind and tidal. The bottleneck hindering the wide-scale adoption of these technologies is the intermittency of available power due to non-uniform climate and weather patterns over the course of the year. These variations prevent renewable energies from sustaining entire economies independently. Presently, secondary power generation must be run in parallel to sustain the base load while renewables are used to meet excess demand during peak load. Batteries are the strongest candidates for the improvement of these systems. They have been applied to enable load-levelling by storing excess power produced and supplying it to the grid during high demand periods. Aqueous metal ion batteries are a strong contender for energy storage from renewable power sources due to their excellent safety, low cost, and environmental friendliness. In 2012, our research team developed the Rechargeable Hybrid Aqueous Battery (ReHAB) which featured a lithiated manganese oxide cathode and a zinc foil anode. While this battery generally performs well, it is compromised by parasitic processes at the anode which decrease its performance and operational lifespan. The main failure modes of this system are runaway dendrite formation from non-uniform electrodeposition and a high degree of corrosion caused by the acidic environment. In this research, polyethylene glycol is integrated into the ReHAB system. The hypothesis is that PEG can be used to inhibit corrosion and dendritic growth. Low molecular weights (less than 500 gmol-1) are used due to their greater solubility in the sulfate-based electrolyte. In the first project, 1 vol.% PEG200 is able to improve the discharge capacity of ReHAB cells compared to the control electrolyte after 300 cycles. This is accomplished via minimizing corrosion and dendrite growth at the anode. Furthermore, when dendrites are pre-grown on the anode prior to battery testing, the 1 vol.% PEG200 cells are able to consistently improve cycling life by more than five times. In the second project a novel gel electrolyte is developed for the ReHAB system to improve cycling performance, reliability and reduce leakage of electrolyte during processing. Fumed silica is used as the thixotropic gelling agent and forms an interconnected network to support aqueous media in the electrolyte. PEG300 is used as the corrosion inhibitor and dendrite suppressant. The developed PEG-FS gel decreases corrosion by up to 40% and dendrite growth rate by 78%. In the absence of the PEG-FS gel electrolyte the zinc anode was severely consumed by corrosion reactions. Additionally, the PEG-FS-gel increases the capacity retention of ReHAB cells by approximately 40% after 1000 cycles in the large battery system. The mechanism of interaction between PEG polymers and the zinc anode are also examined in depth using various electrochemical, spectroscopic and microscopic techniques. PEG adsorbs to the anode surface during charging and subsequently desorbs during discharge. PEG polymers were found to specifically adsorb to preferential nucleation sites on the zinc electrode, leading to several beneficial effects. Firstly, the surface diffusion of zinc ions is decreased, and they are forced to deposit on less favored sites on the electrode surface, leading to controlled electrodeposition. Secondly, the PEG polymers obstruct the adsorption of hydrogen ions during the charging process, thus decreasing corrosion and hydrogen evolution reactions. The adsorption-desorption mechanism allows the PEG to be recycled during battery operation and remain effective for very long periods. Overall, highly compelling improvements are made to the ReHAB system with the addition of PEG to the aqueous electrolyte. By subduing corrosion and dendrite formation, the utilization of lithium is improved more than five-fold. This is a serious contribution as it allows for a much more efficient use of increasingly rare resources. The merits of PEG combined with its ease of integration into current aqueous battery systems highlights how they can be made into viable alternatives to lead-acid and organic lithium ion batteries for large scale energy storage applications.