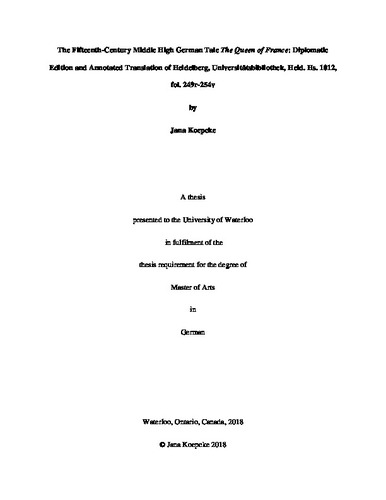 This thesis treats one version of the anonymous, Middle High German, rhymed couplet text known as The Queen of France, as extant in the manuscript Heidelberg, Universitätsbibliothek, Heid. Hs. 1012, fol. 249r-254v. It provides a diplomatic edition and annotated translation of this version of The Queen of France, with introductory material and notes. The edition of Heid. Hs. 1012 conforms to the core principles of a diplomatic edition with minor deviations following the precedent of the Global Medieval Sourcebook (GMS), an online open-access platform that strives to present diplomatic editions, translations, and commentaries of short medieval texts from around the world (Starkey et al.). A popular story in late medieval Germany, The Queen of France survives in twenty-four, often varying manuscript versions, and was adapted in visual media and other genres as well, so that its many versions conform to Linda Hutcheon’s definition of adaptations as “deliberate, announced, and extended revisitations” of known stories (xiv). A diplomatic edition, which focuses on reproducing with only minimal changes the version of a text in a single manuscript, can spotlight salient variance in Heid. Hs. 1012’s adaptation of The Queen of France, foremost its heightened insistence on the queen’s virtue. It can show that such variance is typical for medieval textuality and thus for fictional works written in medieval German. Translation theory justifies a range of translation practices, from word-for-word to sense-for-sense. The translation in this thesis uses a sense-for-sense approach because such an approach can make this pre-modern text accessible to a modern audience. The first chapter outlines the research questions this thesis seeks to address: How does a diplomatic edition spotlight the salient variance in different versions of the same story? How does a sense-for-sense translation make a medieval text more accessible to a modern audience? The second chapter establishes a theoretical foundation by describing textual criticism and translation studies, including brief overviews of the origins of these fields. The third chapter highlights the four objectives of my thesis and provides an insight into the manuscript Heid. Hs. 1012. The fourth chapter explains the methodological background of this edition and translation. There exist different methods and purposes of editions and translations, which means that there are certain choices to be made. The fifth chapter turns to the results of my editing and translating work. The concluding chapter discusses the meaning and implications of the edition and translation and suggests directions for future research. I explain why this thesis follows the scholarly consensus of naming the tale The Queen of France, why legal terminology plays a salient role, and why translating this Middle High German text is not as easy as it might seem.