Hydrology of a Moderate–Rich Fen Watershed Prior to, and Following Wildfire in the Western Boreal Plain, Northern Alberta, Canada, 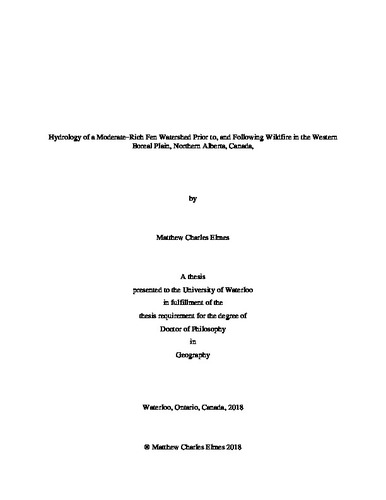 Peatlands are a dominant land feature in the Athabasca Oil Sands Region (AOSR) of the Western Boreal Plain (WBP), northern Alberta, Canada, comprising >50% of the total land area, many of which are moderate–rich fens. The carbon stocks of moderate–rich fens in the WBP are susceptible to degradation through anthropogenic– and climate–related factors; yet, few studies have aimed to understand their hydrologic function. In addition, low relief and subtle topographic gradients allow for the expanse of peatland development along the margins between fen and upland. Few studies have explored the hydrologic role of fen margins, despite their typically lower water tables and therefore increased susceptibility to drying. This seven–year (2011–17) study explores the hydrologic function of fen and margin areas in a moderate–rich fen watershed, and how this function changes following wildfire. The study site (Poplar Fen; 56°56′N; 111°32′W) is located in a meltwater channel belt characterized by relatively thin outwash sand and gravel (mean thickness = 6 m) underlying the peat. The watershed is underlain by a thick (~16 m) and shallow (~7 m below ground surface) aquitard, restricting hydrological connectivity between the fen and underlying regional aquifers. Vertical hydraulic gradients between peat and the underlying outwash aquifer and horizontal hydraulic gradients between fen and upland varied in correspondence with diurnal and seasonal precipitation trends. Groundwater discharge to the fen was enhanced during wet periods characterized by high rainfall. Conversely, flow reversals (groundwater recharge; fen to underlying aquifer and upland), and subsequently, enhanced fen water table drawdown persisted during extended dry periods. Results suggest the dominance of a local flow–system influencing the recharge/discharge patterns at Poplar Fen, with hydraulic head in the underlying outwash aquifer highly susceptible to fluctuations in the presence and absence of precipitation–driven recharge from adjacent uplands. Contrary to fen areas, which received groundwater discharge from the underlying outwash aquifer during wet periods, and were prone to vertical flow reversals during dry periods, margins acted as permanent vertical recharge zones, providing groundwater to the underlying outwash aquifer. Furthermore, margins acted as large facilitators of lateral groundwater flow between upland and fen, and high pH and base cation concentrations allowed for the unique assemblage of upland and fen vegetation communities. Therefore, margins act as distinct ecohydrological units, which influence the hydrologic function of Poplar Fen watershed. In May of 2016, Poplar Fen was impacted by the ~590 000 ha Horse River wildfire, which spread into the city of Fort McMurray and subsequently advanced across the boreal mosaic of mixedwood uplands and peatlands. The destructive nature of the fire motivated the investigation of the hydrometeorological conditions that preceded the fire. Field hydrometeorological data from Poplar Fen between 2015–2016 confirmed the presence of cumulative moisture deficits prior to the fire. The susceptibility of fen and upland areas to water table and soil moisture decline over rain–free periods (including winter) was enhanced by the reliance on supply from the localized flow systems which originate in adjacent topographic highs. Subtle changes in topographic position were also found to influence groundwater connectivity, leading to greater organic soil consumption by fire in wetland margins and at high elevations. It was ultimately the accumulated moisture deficits, dating back to the summer of 2015, which led to the dry conditions that preceded the fire. To address the potential changes in the hydrologic function of the uplands at Poplar Fen, differences in water repellency and hydrophysical properties were measured for burned and unburned upland duff and mineral soils. Samples were taken in the fall of 2017, the year after the watershed had burned (May 2016). Study locations included burned and unburned jack pine–dominated brunisol, and black spruce–dominated riparian uplands. Results illustrated significantly lower water repellency and higher infiltration on burned uplands at both upland types. This was due primarily to the destruction of naturally occurring hydrophobic substances by the fire. Furthermore, no significant differences were detected in duff moisture retention in brunisol uplands; however, burned duff samples had significantly lower water retention in riparian uplands. It is postulated that the lower water retention in riparian uplands was due to the greater organic layer thickness there, thus greater fuel load and potential for exceeding the temperature threshold of repellency destruction. Following retention, all soil cores exhibited high hysteresis, with differences in volumetric moisture content averaging 0.38 and 0.34 m3 m–3 at –10 cm pressure for brunisol and riparian uplands, respectively. A net gain in upland water table recharge is anticipated at Poplar Fen following wildfire, which will help in sustaining recharge to the local flow systems which discharge to lower–lying fen areas and prevent water table drawdown, thus accelerating the fen moss recovery process. In conclusion, Poplar Fen, and watersheds with a similar hydrogeologic setting, will become increasingly susceptible to drying in the future due to anticipated changing climate scenarios. This will likely lead to enhanced water table drawdown, peat oxidation and subsequent decomposition, as well as seral succession to a more ombrogenous peatland system, rendering them more vulnerable to wildfire. However, base–rich fens are typically understudied in the WBP. It is recommended that similar hydrological methods are applied to other base–rich systems (including extreme–rich fens) throughout the WBP, which will improve our understanding of how these systems will respond to disturbance. Poplar Fen may also serve as an appropriate analogue for oil sands reclamation. Results from this thesis suggest that the hydrologic function of natural fen systems (i.e. moderate–rich fens) in the AOSR can be replicated. However, considering the susceptibility of this system to drying over regional climate cycles, fen reclamation should focus on specific engineering of the landscape to provide the necessary hydrological conditions for minimizing fen recharge conditions, water loss, and susceptibility to carbon degradation from enhanced decomposition and/or wildfire.