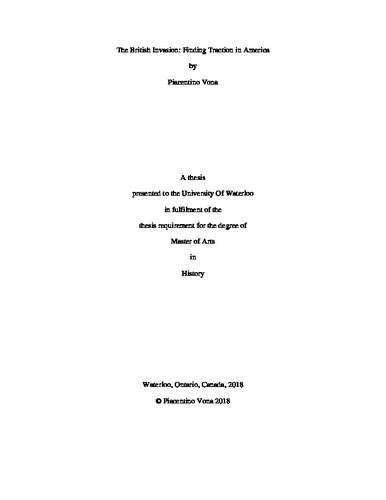 As a period of American History, the 1960s has provided historians and academics with a wealth of material for research and scholarship. Presidents John F. Kennedy, Lyndon B. Johnson and Richard Nixon, the Vietnam War, the hippie era, and the Civil Rights Movement, among other topics have received thorough historical discussion and debate. Music was another key aspect in understanding the social history of the 1960s. But unlike the people and events mentioned above, historians have devoted less attention to music in the historical landscape. The British Invasion was one such key event that impacted America in the 1960s. Bands such as the Beatles, the Rolling Stones, and the Who found their way into the United States and majorly impacted American society. Using secondary sources, newspaper articles, interviews and documentaries on these bands, this thesis explores the British Invasion and its influence in the context of 1960s America. This thesis explores multiple bands that came in the initial wave. It follows these bands from 1964-1969, and argues that the Beatles, the Rolling Stones, and the Who shared common multiple factors that allowed them to attain the traction to succeed and to maintain that success in the United States. Referred to as the Big Three throughout the thesis, these three bands managed to enjoy success on a level previously unprecedented for British bands or singers through influential managers, era-defining hits, use of television and film, master songwriters, evolution of their music, and their staying power. All these factors, combined, allowed the them to succeed in America. In contrast, not every British Invasion band was as fortunate, as Gerry and the Pacemakers, the Yardbirds, the Animals, the Zombies, and the Dave Clark Five failed to maintain success in America after their initial hit songs. Regardless, the British Invasion had a lasting impact on music in the United States and helped usher in the era of Classic Rock.