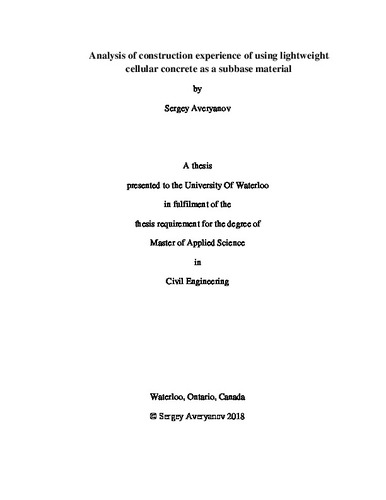 Canada has the second largest territory in the world and its pavement network has over 1,000,000 km of roads spread over regions with various existing soil types. One of the challenges for engineers is to determine the soil type for a particular road project and to develop a pavement design accordingly. It is very important to identify weak or frost-susceptible soils, as they are influenced greatly by weather conditions which may lead to settlement issues and may affect the overall pavement performance. One viable option to overcome the consequences of settlement problems is the usage of lightweight materials, such as Lightweight Cellular Concrete (LCC), which reduces the effective stress on the underlying soil. This material has a number of advantages including: it is lightweight; exhibits superior thermal properties; is freeze-thaw resistant; has good flowability; is cost-effective; and sustainable. This study aims to assess LCC in terms of performance in past projects, mechanical properties of LCC from the ongoing project as well as prediction of its field performance in the future. Already existing road sections with the installed LCC as a subbase were studied. The available information from those road sections was compiled and analyzed to establish similarities and differences in the cases as well as challenges and recommendations for LCC installation. All projects were aiming to solve the settlement problem. It is observed that settlement usually occurs on localized parts of the road and not on its whole length. After visual inspection, some of the studied sections, such as Winston Churchill Boulevard and Highway 9 were found to have no severe rutting or fatigue cracking, however, longitudinal and transverse cracking were observed at Dixie Road, particularly at the adjacent section to the Granular base pavement. The samples from the ongoing site were collected for laboratory testing. Results from the laboratory determined the density of the LCC in the hardened stage as approximately 40 kg/m3 lower than its plastic density. The similar information was found in the literature. However, compressive strength of the in-situ cast material was determined to be higher than for the similar densities in the previous findings. Modulus of elasticity also differs from the typical values, whereas it was found to be lower. Poisson’s ratio values were found to be in the typical range. To predict the ability of the road sections to bear the designed traffic loads and to predict in-service performance, the case studies with settlement issues were considered. Failure criteria analysis has been conducted. The results of the failure criteria analysis indicated that the usage of LCC as a subbase material is more durable than the conventional granular material with similar thickness. This also shows that using LCC as a subbase layer material could be potentially effective.