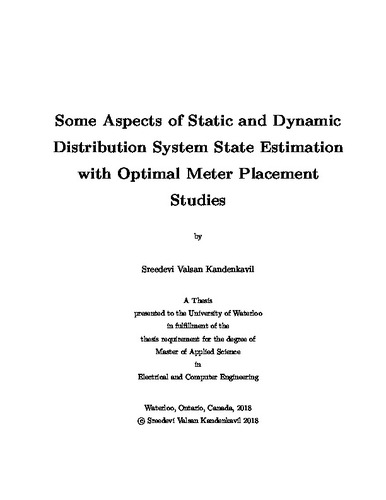 In a power distribution system, due to the evolution of Active Distribution Networks (ADNs), there is a possibility of violation of the system operational constraints. A state estimator provides an approximate snapshot of the distribution system operation when the bus voltages and power measurements are available. Thus it plays a key role in monitoring the system, thereby ensuring a safe state of operation. According to the nature of the system, Distribution System State Estimation (DSSE) can be classified in to static DSSE and dynamic DSSE. Static DSSE is commonly designed as a Weighted Least Square (WLS) estimator using either bus voltages or branch currents as system states. For dynamic DSSE, the performance of static state estimators are limited. A Kalman filter based state estimator can be used in such time varying systems. A study of the algorithms used for these two DSSE methods is necessary in order to analyze the factors affecting the estimation accuracy. In a power distribution system, with limited availability of measurements, and additional measurements being expensive, careful selection of the location for the placement of meters becomes important. The measurement meters typically considered are Phasor Measurement Units (PMUs) and power (PQ) meters. The existing placement problems lay more emphasis on minimizing the cost of installing such meters, while the quality of estimation remains ignored. Thus there is a need to formulate methods for optimal allocation of meters in a cost effective way without altering the accuracy of DSSE. In this work, a detailed study is conducted on the two static DSSE algorithms, Node Voltage based State Estimation (NVSE) and Branch Current based State Estimation (BCSE) and the DSSE performance is compared based on Average Root Mean Square (ARMSE) Value of state estimates. The thesis also analyzes the impact of the number of PMU measurements available on DSSE performance. Several optimization based approaches are proposed to address the optimal meter placement problem considering different objectives such as minimization of cost, WLS residual estimate, a multi-objective function comprising cost and WLS, and the ARMSE of the estimated bus voltage. An Iterative Extended Kalman Filter (IEKF) is used for performing dynamic DSSE. The dependency of various parameters such as selection of time frame, apriori estimate information length and PMU measurement errors on the accuracy acquired by DSSE is also presented. The studies and proposed models are simulated in a 33-bus distribution feeder. The results illustrating the efficiency and speed of convergence of different static and dynamic DSSE methods are discussed. The various optimization models for meter allocation are formulated and compared based on meter placement cost and ARMSE of voltage estimates.