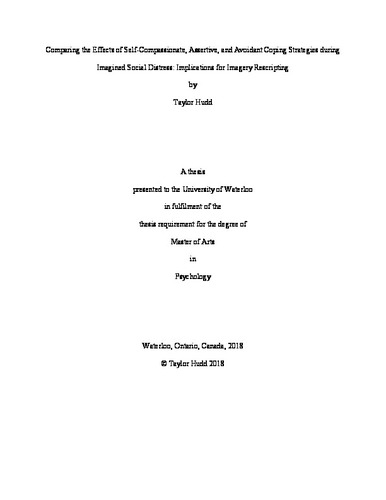 Imagery Rescripting (IR) is a relatively novel therapeutic intervention for social anxiety (SA) in which patients recall and engage with autobiographical memories of socially distressing events. During the intervention phase of IR, patients are asked to rescript the events of the memory to develop a more satisfying outcome for their “younger self” within that memory. This intervention strategy has been shown to reduce distress when recalling the memory and to yield reductions in SA symptoms at post-intervention and follow-up. However, some patients report significantly fewer positive outcomes than others. It is possible that the effectiveness of outcomes in IR may, at least in part, depend on the methods patients choose to guide their “younger selves” toward more satisfying outcomes within their imagined memory during the intervention phase of IR. With an eye toward gathering foundational data for future studies of IR in clinical samples, the primary goal of the present study was to examine the relative effects of visualizing using avoidant, self-compassionate, or assertive intervention strategies in response to imagined socially distressing situations outside the context of IR. The study measured how each strategy influenced emotional distress and perceived degree of mattering to others, and examined whether the relationship between the type of intervention strategy used and outcomes may be moderated by trait levels of SA. Undergraduate participants (N = 258; 67% female) were assigned to one of three conditions in which they were asked to imagine using one of three strategies (avoidance, self-compassion, or assertiveness) in response to five vignettes describing socially distressing events. Results of regression analyses demonstrated that higher levels of SA and having been assigned to the avoidance condition (compared to self-compassion or assertiveness) were both associated with higher levels of emotional distress and negative self-beliefs. When analyses were re-run comparing participants at the upper and lower ends of the SA spectrum, low socially anxious (LSA) participants (n = 48) did not differ in outcomes across assigned coping strategies; in contrast, among high socially anxious (HSA) participants (n = 41), the use of self-compassionate strategies significantly lowered negative affect compared to the use of avoidance and assertiveness. Implications for IR protocols are discussed within the context of contemporary CBT models of SA.