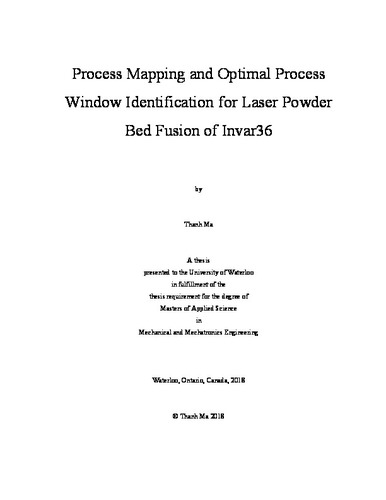 The development of Additive Manufacturing (AM) has reached a point where it is positioned to be disruptive for the manufacturing sector, with a majority of manufacturers having leveraged the use of AM in their operations. Laser powder bed fusion (LPBF) is one subclass of AM in particular that has seen tremendous growth and adoption in the past decade. This is due to the increased needs for customized metallic parts and the demand for light-weighting and performance optimization. However, the adoption of LPBF (and in extension, AM) is challenging because of numerous issues that affect the quality of LPBF-built parts, where the complex interactions between parameters make it difficult to predict part quality behaviour. To ensure low risk of deployment of this technology, progress still needs to be made in the design of strategies for process windows identification of new materials, of process predictive tools, and of process control strategies to ensure process stability and traceability. Within this work, the optimization of LPBF-built parts is performed for a novel material for LPBF, such that it may be possible to garner new insights into process development for future material adoption in the AM space. The material in question is Invar36, which is an iron-nickel alloy that is known for its low thermal expansion behaviour, and it is used in applications that require such dimensional stability over a temperature range. Its applications include metrology, cryogenic storage, and precision mounting applications. However, the material is known to have challenges with manufacturability. The material has a tendency to crack during solidification and reheating, and its high nickel content results in unfavorable work hardening characteristics that increase machining costs. Through the use of LPBF and its unique capabilities, it may be possible to sidestep the manufacturing difficulties of the material, and potentially further improve on the material’s uses by reducing costs through optimized design strategies. The work performed within uses a gas-atomized blend of Invar36 powder. After characterization, the powder was found to conform to the particle size distribution, as specified by the manufacturer, and defined by ASTM standards. It is also found that the powder size distribution adhered to a bimodal distribution with centers at about 27 μm and 40 μm. The rheology of the powder was also examined, with overall observations suggesting that the material displays good flowability behaviour. The experimentation work was split into two separate experiments. The first experiment was structured to develop a process map and then identify an optimal process window for the LPBF of Invar36 that could characterize the performance of the material on the following process outcomes: density, and thermal expansion. The parameters of focus within this experiment were chosen such that they directly affect the energy input within the material. These parameters are laser power, point and hatch distance, and laser exposure time. Techniques used for this experiment included detailed pore space analysis through computed tomography (CT) and thermal expansion measurements through thermomechanical analysis (TMA). The experiments were created using factorial design metholodology and were analyzed using statistical techniques. From the results, it was found that the material tended towards optimal solid fraction at lower power levels (250 W), larger point and hatch distances (80 μm), and lesser exposure times (60 μs), with the best performing parts reaching ≈99.92% solid fraction. However, upon observation it was found that a large number of pores within the samples were biased towards the border region of samples, and appeared to be affected by parameters that were uncontrolled in the first experiment. Re-analysis of the results without these uncontrolled areas showed that, within the core regions, optimal samples had solid fractions of 99.99% once a minimal power threshold was met (>250 W). In terms of thermal expansion, the material was found to have ideally low thermal expansion at lower energy density ranges, and as a whole, all parts performed better than conventional Invar36. The second experiment focused on eliminating the pores created at the border regions. From observations, it was found that parameters such as power, border power, fill contour offset, and hatch compensation are significant parameters in the aforementioned regions. CT analysis was once again employed in this experiment, and parts were fabricated adhering to a factorial design. As a result, it was found that the general trend for low porosity parts had low power (275 W), low border power (250 W), low fill contour offsets (50%), and low hatch compensations (25%). The improvement on the solid fraction in the overall part increased to 99.99%. When considering only the border regions, the majority of pores were eliminated, with the border solid fraction increasing to up to 99.94%. However, one difficulty during analysis is that the errors were not normally distributed; and thus, the results presented for this chapter may not have been entirely representative of the complexity of the process and process parameter interactions at the border of the parts. As a final study, a numerical modelling approach that was taken to investigate the possibility of using simulations to predict part quality behaviour (through melt pool analysis) of Invar36 parts. The results show that the model under-predicts the melt depth, and is most likely due to the approximations made within the model.