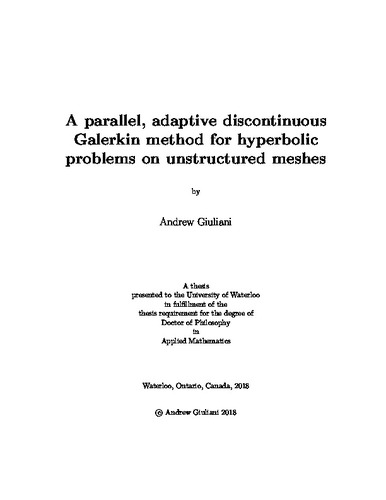 This thesis is concerned with the parallel, adaptive solution of hyperbolic conservation laws on unstructured meshes. First, we present novel algorithms for cell-based adaptive mesh refinement (AMR) on unstructured meshes of triangles on graphics processing units (GPUs). Our implementation makes use of improved memory management techniques and a coloring algorithm for avoiding race conditions. The algorithm is entirely implemented on the GPU, with negligible communication between device and host. We show that the overhead of the AMR subroutines is small compared to the high-order solver and that the proportion of total run time spent adaptively refining the mesh decreases with the order of approximation. We apply our code to a number of benchmarks as well as more recently proposed problems for the Euler equations that require extremely high resolution. We present the solution to a shock reflection problem that addresses the von Neumann triple point paradox. We also study the problem of shock disappearance and self-similar diffraction of weak shocks around thin films. Next, we analyze the stability and accuracy of second-order limiters for the discontinuous Galerkin method on unstructured triangular grids. We derive conditions for a limiter such that the numerical solution preserves second order accuracy and satisfies the local maximum principle. This leads to a new measure of cell size that is approximately twice as large as the radius of the inscribed circle. It is shown with numerical experiments that the resulting bound on the time step is tight. We also consider various combinations of limiting points and limiting neighborhoods and present numerical experiments comparing the accuracy, stability, and efficiency of the corresponding limiters. We show that the theory for strong stability preserving (SSP) time stepping methods employed with the method of lines-type discretizations of hyperbolic conservation laws may result in overly stringent time step restrictions. We analyze a fully discrete finite volume method with slope reconstruction and a second order SSP Runge-Kutta time integrator to show that the maximum stable time step can be increased over the SSP limit. Numerical examples show that this result extends to two-dimensional problems on triangular meshes. Finally, we propose a moment limiter for the discontinuous Galerkin method applied to hyperbolic conservation laws in two and three dimensions. The limiter works by finding directions in which the solution coefficients can be separated and limits them independently of one another by comparing to forward and backward reconstructed differences. The limiter has a precomputed stencil of constant size, which provides computational advantages in terms of implementation and runtime. We provide examples that demonstrate stability and second order accuracy of solutions.