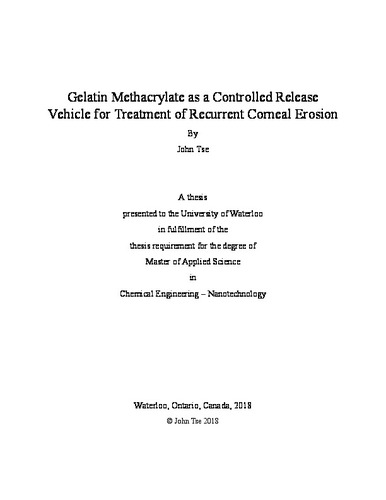 Patients with recurrent corneal erosions (RCE) experience unpredictable and painful episodes, caused by the loss of superficial corneal epithelial cells. The erratic nature of RCE often leads to patient anxiety, and can significantly impact one’s productivity and quality of life. Historically, patching (to prevent blinking) and ocular lubricants were the standard treatment for RCE. More recently, soft bandage contact lenses (BCLs) are commonly used, as this allows the use of vision during the healing process. The issue with BCLs is that they do not outperform ocular lubricants in terms of their efficacy or speed of recovery because they currently lack the biological factors that are crucial to ocular surface repair. Furthermore, ocular lubricants only possess a 5% bioavailability, with the majority of active ingredients being washed away by the tear film. Other treatments may involve more invasive methods such as anterior stromal puncture or phototherapeutic keratectomy which enhances the epithelial adhesion to Bowman’s membrane or the underlying stroma. The objective of this project was to fabricate and characterize gelatin methacrylate (GelMA) as an enzyme-triggered controlled release vehicle in the presence of matrix metalloproteinase (MMP) for either bovine lactoferrin (BLf) or hyaluronic acid (HA) and to test these molecules as viable drugs for enhancing corneal epithelial wound healing. GelMA revealed a tunable profile fit for diffusion- and enzyme-mediated controlled release of drugs above the 70kDa molecular weight range. A 70kDa FITC-dextran model molecule validated the effect of concentration of GelMA, methacrylation degree and UV irradiation on the controlled release profile. An increase in concentration and methacrylation degree resulted in a stronger and denser gel with a lower burst release, whereas a high UV irradiation dosage allowed for higher crosslinking. The incorporation of GelMA into a commercial Biofinity contact lens did not show significant change in the mechanical properties, light transmittance or water contact angle demonstrating promise for future applications. Although a GelMA-incorporated lens could not load an adequate amount of drug for the molecules selected, optimization through freeze-drying proved to increase loading by nearly 50%. BLf demonstrated accelerated wound healing on the rabbit corneal epithelial scratch wound assay, whereas HA increased wound healing on both rabbit and human corneal epithelial cells in a scratch and polydimethylsiloxane (PDMS) stamp wound model. The PDMS stamp wound assay provided a more consistent initial wound area and was used for future experiments. Similarly, HA was established to be more versatile in wound healing and was selected as the drug of focus. The 60kDa HA-loaded GelMA patches showed promise in healing human corneal epithelial wounds at lower drug loadings of 150μg and 250μg, however, the hydrogel became opaque after crosslinking. ELISA tests on the controlled release of HA-loaded GelMA confirmed that FITC-dextran was viable as a model molecule to reproduce release profiles.