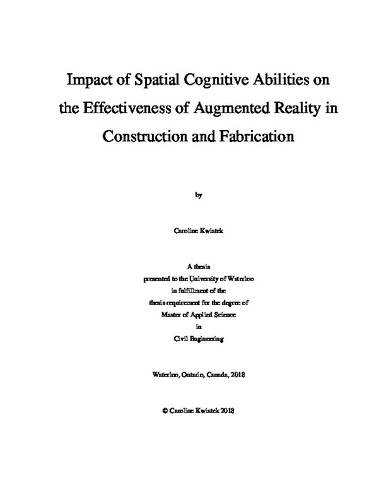 Modular construction has emerged to help address the challenges posed to the construction industry by stagnant productivity rates and a shortage of skilled labor as it allows for greater automation and for work to be completed in a controlled fabrication shop environment as opposed to on a construction site. This requires tighter tolerance controls than traditional stick-built construction because the components must fit together easily with minimal on-site intervention. Modular construction has become widespread in industrial piping construction projects. Pipe spools are assembled in a fabrication shop, installed in a module and then the modules are shipped to the construction site for installation. Since piping components account for up to 50% of the cost of an industrial construction project, it is imperative to assemble these components quickly and correctly. In recent years, augmented reality has become increasingly prevalent as technological advances allow for higher quality digital environments at lower price points. These advances coupled with the increased accessibility of high-quality inexpensive 3D scanning technologies has made it possible to develop augmented reality solutions for real-time conformance control of pipe spool assemblies. An experiment was designed and conducted with the objective of assessing how an augmented reality software can increase productivity and reduce rework in pipe spool assembly. Forty engineers and twenty-one pipe fitters were recruited to assemble a PVC pipe spool using either a two-sided isometric drawing or an augmented reality software. The participants were assessed for the time required to complete the assembly and for the amount of rework they had to complete to create a compliant assembly. They were also surveyed regarding their personal interest in technology and their input on how to best implement this technology. Participants were asked to complete a short test to assess their spatial skills. The results of the completed study show that the use of an augmented reality software can increase productivity and minimize the impact of rework for both expert (pipe fitter) and drawing-literate (engineer) users. The revised workflow created through the usage of such a software essentially eliminates traditional rework. It was found that all users can benefit from the use of such a tool but that users who have lower spatial cognitive skills benefit the most.

Caroline Kwiatek (2018). Impact of Spatial Cognitive Abilities on the Effectiveness of Augmented Reality in Construction and Fabrication. UWSpace. http://hdl.handle.net/10012/13705