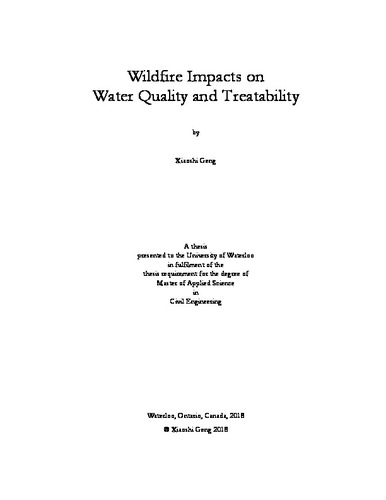 Forests are critical source areas for downstream drinking water supplies in many parts of the world. However, large-scale landscape disturbance by insect infestation and wildfire—exacerbated by warming climate—can have a significant impact on downstream water quality and drinking water treatability. In 2003, the Lost Creek wildfire burned a nearly contiguous area of 20,000 ha and altered water quality in several tributaries of the Oldman River watershed in southwestern Alberta, Canada. Coagulant demand and two key water treatability proxies (turbidity and dissolved organic carbon [DOC]) were evaluated in reference (unburned), burned, and burned and salvage logged watersheds to describe the effects of these land disturbance on drinking water treatability. DOC concentration and character (hydrophobicity by resin fractionation, aromaticity by UV254, and specific UV absorbance [SUVA]) were evaluated. Eight years after the disturbance, turbidities in streams draining the burned and burned and salvage logged watersheds remained elevated by factors of ~15 and ~22 on average respectively, compared to the reference watersheds. Stream DOC concentrations remained elevated by factors of ~2 and ~4 on average respectively. Stream DOC hydrophobicity respectively increased by factors of ~1.5 and ~1.4 on average and stream DOC aromaticity also increased by factors of ~1.5 and ~1.6 on average, as a result of these disturbances. These changes in DOC character in impacted streams suggest increased allochthonous inputs from disturbed watersheds; however, further investigation is needed to define the pathways by which these inputs would be delivered to streams, especially so long (eight years) after disturbance. Although hydrophobic and aromatic DOC is generally more amenable to removal by coagulation during drinking water treatment (relatively hydrophilic and aliphatic DOC), coagulant demand (evaluated by jar testing) significantly increased in the headwaters streams of the disturbed watersheds, thereby demonstrating potentially substantial cost implications for water treatment facilities downstream of such disturbances. Moreover, source water quality was notably more variable and changed rapidly in the streams draining disturbed watersheds; such increasingly variable and rapidly changing source water quality has the potential to challenge drinking water treatment infrastructure and operational responsiveness beyond their capacities. As a result, severe watershed disturbances such as wildfires can significantly increase the probability of service disruptions; moreover, as demonstrated herein, the effects of wildfire on water quality and drinking water treatability can be long lasting.