"The Least Possible Fuss and Publicity": The Politics of Immigration in Postwar Canada, 1945-1963. 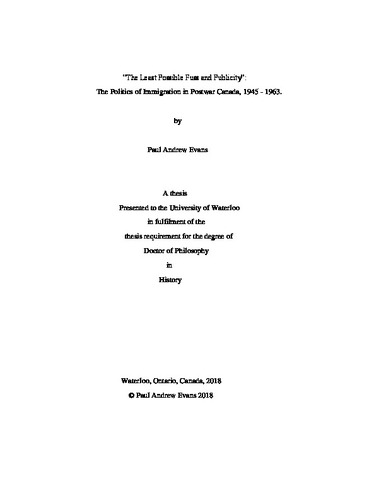 This thesis examines immigration policy in postwar Canada. Its focus is on the changes to immigration policy implemented between 1945 and 1963 by the governments of Mackenzie King, Louis St. Laurent, and John Diefenbaker, and on the events, ideas, and influences that drove those changes. The story is told through extensive primary-source research from the archival records of the federal Immigration Branch, the departments of Citizenship and Immigration, Labour, Agriculture, External Affairs, and the Privy Council Office. The Parliamentary record (Hansard) is also carefully examined, together with contemporary media reporting on immigration issues, the correspondence of politicians and policy-makers, and the statutes and regulations that established immigration laws during the period. Among the topics discussed are: the development of a legislative, regulatory, and administrative framework for immigration policy; the impact of international events on policy decisions; the resistance to immigration reform from within immigration bureaucracy; and the impact of racism and racial ‘preferences’ on policy. Throughout the period, the political considerations presented by these issues remained uppermost in the minds of those responsible for Canada’s immigration policy.