Analysis and Design of a Stationary Magnetic Abrasive Finishing System 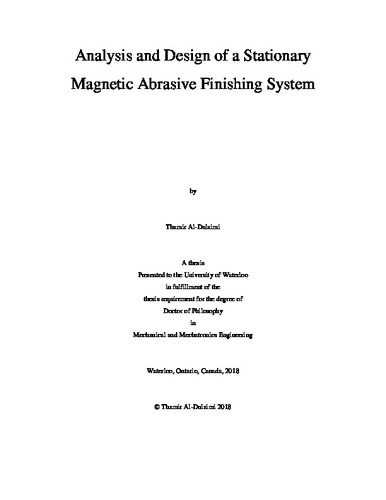 Magnetic Abrasive Finishing (MAF) is a very effective technique used in precision surface finishing and polishing processes. It is defined as one of the advanced and nonconventional finishing processes, which is used to improve the characteristics of a finished surface. This technique utilizes a macro-size mixture of iron and abrasive particles moving in a magnetic field to remove material from a workpiece surface at the Nano or Micro scale. The MAF process can produce a finished surface by means of relative motion between a magnetic abrasive and the workpiece surface. The magnetic abrasive is suspended in a magnetic field which is generated by the electromagnets located underneath the workpiece. In this study, a finishing apparatus using a rotating magnetic field, with stationary electromagnets and workpiece, is developed for surface finishing. This system utilizes a rotating magnetic field to control the magnetic force and dynamic motion of a macro-size mixture of iron and abrasive particles. As opposed to conventional finishing processes, this approach eliminates any mechanical motion of the electromagnets and the workpiece, to make the system more controllable and reliable. The mechanism and characteristics of this system are summarized in this study. The finite element method is used to analyze the magnetic flux distribution, magnetic flux density, and magnetic force in the working area. Thus, this study conducts a novel design based on using stationary equipment and a finishing process carried out by regulation of magnetic field. In this design, the magnetic field rotates where the other parts are stationary (the electromagnets and also the workpiece). Consequently, regulating the magnetic field is used to control the magnetic force, which represents the cutting force. This enhances the accuracy and controllability of the process and improves the quality of the final product; and it also can be considered a trial to reduce the mechanical power consumption by eliminating any mechanical motion. Further, an optimization approach is used to determine the optimum design configuration of the electromagnet to maximize the finishing force in the working zone. The optimum dimensions are then used in the fabrication process of the electromagnets for the finishing system setup. Accordingly, experiments are also carried out to finish different materials such as, titanium, aluminum, composite material, polyurethane and Polytetrafluoroethylene (PTFE). The Taguchi systematic technique is used to design the experiments to optimize the process parameters of the finishing process. The Stationary Magnetic Abrasive Finishing (SMAF) process setup of the optimal electromagnet configuration is applied to finish a titanium (CP Grade 2) specimen and the average surface roughness (Ra) is improved from 4.156 µm to 1.94 µm. Also the variation of temperature in the interfering zone between the Titanium specimen and the magnetic abrasive particles is measured using a thermal camera. The measurement shows that the variation during the operation running time (60 mins) is just 14 ̊ C, with temperature change from (23 – 37 ̊ C). This change has an insignificant effect on the surface characteristics and quality. Moreover, a proposed approach is conducted to measure the magnetic force applied on particles. The experimental results of the force measurement are compared with the finite element simulation results. It is shown that there is good agreement between these results, with an average error percentage of 3.5%.