Climate Change and Cultural Anxieties: An Exploration of Dystopian Novels from Before and After Global Warming 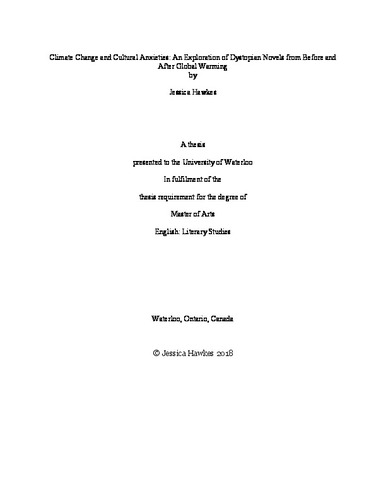 Climate change is one of the most pressing issues of the twenty-first century. However, despite the urgency of the problem, popular political narratives fail to address the issue, suggesting to constituents that climate change is less important than the economy. With this in mind, my research examines whether the public can meaningfully engage with climate change through other popular mediums; namely the novel. In order to gauge concern about climate change, I compared dystopian novels written before and after the year “global warming” was first coined (1975), with the expectation that dystopian novels written after the widespread recognition of global warming would engage more deeply with environmental concerns than their earlier counterparts. This research revealed that there is not a clear-cut difference in environmental representations between pre- and post-1975 dystopias. Rather, the novels fall along a continuum of environmental engagement, with newer novels being more likely to engage with Ursula Heise’s “triple allegiance” of ecocriticism. The greatest difference between novels written before and after “global warming” is their treatment of technological solutions to the climate crisis; newer dystopian works demonstrate how such techno-utopian solutions ultimately fail to address the root causes of the climate crisis, and will do little to mitigate the problems of climate change unless accompanied by social change.

Jessica Hawkes (2018). Climate Change and Cultural Anxieties: An Exploration of Dystopian Novels from Before and After Global Warming. UWSpace. http://hdl.handle.net/10012/13691