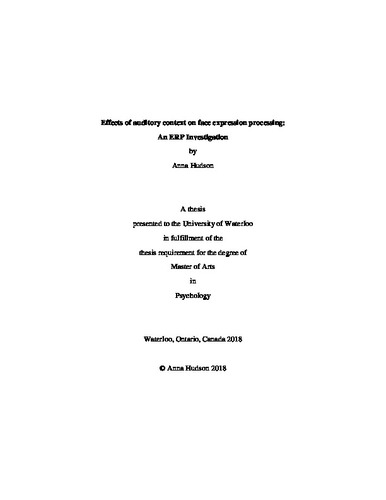 Facial expressions of emotion are a critical source of social information within the environment, but their interpretation is seen to be modulated based on the situational context in which they are presented. Most empirical work examining context on face expression processing have utilized visual cues only, with few studies examining cross-modal effects on face expression processing, despite auditory information being a second critical source of social information within the environment. The present study investigates the effect of positive and negative situational auditory (verbal) information on the identification of happy and angry face expressions. Both behavioural measures, and Event-Related Potentials (ERPs), derived from EEG recordings, were examined. Research has previously demonstrated ERP components elicited by the presentation of faces that are modulated simply by early visual attention (the P1 changes in facial expressions (the N170), emotional valence (the Early Posterior Negativity (EPN)) and the integration of these facets with contextual cues (Late Positive Potential (LPP)). In the present study, congruently paired positive sentences –happy face expressions received a cognitive gain such that reaction times were improved relative to all other conditions. Additionally, accuracy for congruent trials were significantly higher than incongruent trials for both happy and angry faces. Happy expressions elicited marginally enhanced P1, and larger N170 amplitude relative to angry faces. The EPN was more negative for angry relative to happy faces, which continued into the LPP as the counter positive enhancement. There was no interaction between sentence valence and face expression across any indices, potentially reflecting distinct neural networks for processing auditory information, or that the auditory information had been processed much earlier, with no modulation on the visual indices measured in this study.