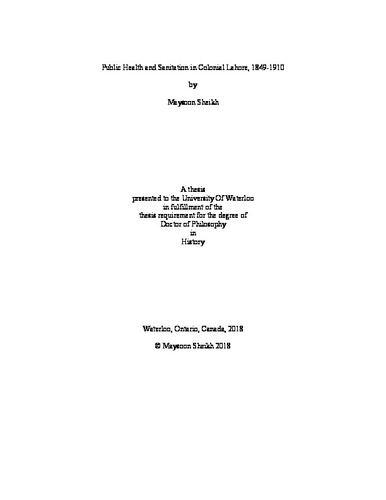 The British annexation of the Punjab in 1849 had important consequences for the city of Lahore. Indeed, the British occupation prompted Lahore’s transformation into a “modern” colonial city. New designs for urbanization, environmental reform, and sanitary improvement were implemented by the city’s new administrators, resulting in important changes to Lahore’s physical and social environment. At first, the impulse to redevelop the city stemmed largely from colonial anxieties about threats to the health of the army and Lahore’s British residents; however, by the late nineteenth century, this “enclavist” approach was replaced by a more extensive public health scheme that was geared towards managing and safeguarding the city’s entire population. With British regulations now aimed more directly at Indians, new geographic and social spaces fell under colonial jurisdiction. Particularly during outbreaks of epidemic diseases, Indian bodies and locally-inhabited spaces came to be targeted more explicitly under colonial surveillance, leading to the imposition of seemingly intrusive and restrictive state policies. But, as this study will demonstrate, the British government’s reform-driven agenda was often disrupted by local actions and behaviours that influenced the proper functioning of colonial rule. Guided by an unapologetic indifference – although not necessarily opposition – towards colonial “modernity”, local intervention into British plans for Lahore reshaped colonial knowledge about the city and its inhabitants. This way, Indians continually shifted relations between themselves and their colonizers and demonstrated, perhaps most importantly, that the scope of British rule in Lahore was often noticeably limited. With a particular focus on issues related to public health and disease, this dissertation draws attention to the important role that Indians played in Lahore’s development during the mid to late nineteenth century and highlights the range of spatial, moral, and social factors that worked to produce local responses to colonial objectives in the city.