Topological and superconducting properties of Weyl and Dirac metals 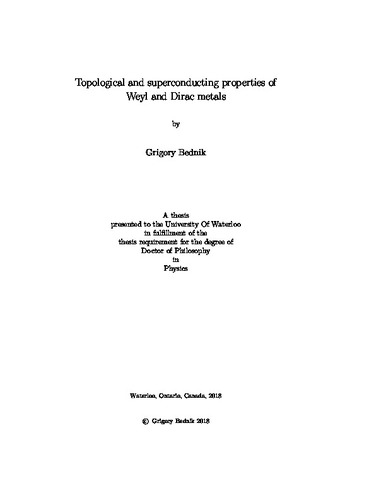 In this work we explore superconductivity and surface states in topological semimetals. We start from general overview of basic properties of topological semimetals. We review general concepts of Chern insulators, their surface states, and use it as a building block for construction of Weyl metals. We also construct double Weyl metals, which are protected both by topology and discrete rotational symmetry. In addition, we study Luttinger model of semimetals - it the simplest case, it is non-topological, but it can acquire topological Weyl points in the presence of non-zero Zeeman field. We present study of its surface states, and also consider its possible critical points. Next, we turn to the problem of superconductivity in Weyl metals. We demonstrate that Weyl metals are natural candidates for hosting unconventional superconductivity. Specifically, we consider two possible superconducting instabilities: unconventional finite momentum FFLO pairing, and zero momentum BCS pairing, which is also unconventional due to spin-momentum locking in Weyl metals. We demonstrate that its BCS phase is more favorable. In addition, we compute its anomalous Hall conductivity, and demonstrate that it is universal, i.e. not affected by the presence of superconductivity. Finally, we consider Dirac metals, which are protected solely by rotational symmetry. We point out, that mirror symmetry along its Dirac points plays special role. We demonstrate, that by breaking the rotational symmetry, it is possible to convert Dirac metal into a topological crystalline insulator, and Dirac metal itself can be viewed as a critical point between its different topological phases. We explore surface states spectrum in the resulting picture, and demonstrate, that this mechanism can be used to show that surface states in Dirac metal always terminate at Dirac points despite being not topologically protected.