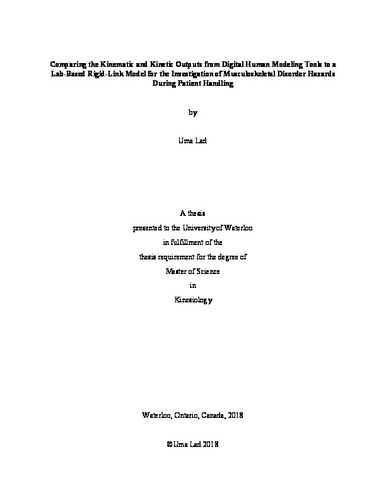 Patient repositioning tasks expose healthcare providers (HCPs) to high bone-on-bone forces, resulting in the development of musculoskeletal disorders (MSDs) (Fragala,2011). Researchers have been able to estimate biomechanical exposures during patient turning using kinematic and kinetic data collected from HCPs (e.g., Marras et al., 1999); however, many of these laboratory-based studies require considerable time and resources to execute and it also remains challenging to gather reliable data (Jäger et al., 2013). Digital human modeling (DHM) may offer unique advantages over direct measurement to estimate biomechanically relevant exposures. Investigators have used DHM to evaluate MSD hazards (Cao et al., 2013; Potvin, 2017); however, there is limited evidence on the fidelity of their outputs. The objective of this study was to compare the kinematic and kinetic outputs produced by two commercial DHM software packages against those generated using a lab-based motion-capture driven approach when analyzing HCPs performance of patient turns. Twenty-five (25) HCPs (eight males) performed a patient turn in the laboratory using a hospital bed with a live 82kg male patient. Whole body kinematics and sagittal plane video were collected. External peak hand force was measured using a force gauge. An accelerometer was placed on the sternum of the patient to identify point of initial patient motion which was assumed to represent the time-point of peak hand force application. Whole body kinematics were used to drive a rigid linked segment model for each participant using Visual3D (C-Motion Inc., Germantown, USA). Measured peak hand force was divided by two and applied to the model at the grip center of each hand at the frame of peak force application. A top down modeling approach was used to calculate trunk and shoulder joint angles and L4-L5 and shoulder joint moments about the flexion/extension axis. These outputs were extracted and compared against DHM software outputs. Siemens Jack (V 8.4) and Santos Pro DHM software packages were used to simulate the patient turn. The static patient turn posture used by the HCP was modeled using the manual joint manipulation, posture prediction and motion capture data importing approaches available in both software. Anthropometrics and peak hand force gathered from the laboratory experiment were inputted into the digital models. trunk and shoulder joint angles and L4-L5 and shoulder joint moments were computed and extracted about the flexion/extension axis from each digitally modeled posture. RMANOVAs, Pearson Product Moment correlation coefficients and Bland Altman analyses were used to compare DHM outputs to the lab-based model outputs. Results from this investigation indicate that the use of Siemens Jack’s (V 8.4) manual joint manipulation approach estimated low back and shoulder kinematics and kinetics that were in agreement with lab-based model outputs. The kinematics and kinetics computed using the posture prediction and motion capture driven approaches to modeling the patient repositioning task, using both Siemens Jack (V 8.4) and Santos Pro were not in agreement with the lab-based outputs. This may have been a result of differences in kinematic modeling assumptions related to the structure of skeletal linkage models, joint decompositions, degrees of freedom in each model and anthropometrics used in DHM software. The use of DHM tools for biomechanical analyses of patient repositioning tasks has the possibility to aide in the investigation of MSD exposures; however, it is important for investigators to understand the purpose of each DHM modeling approach as well as the underlying assumptions of digital human models that may affect kinematic and kinetic outputs used to quantify the exposure to MSDs.

Uma Lad (2018). Comparing the Kinematic and Kinetic Outputs from Digital Human Modeling Tools to a Lab-Based Rigid-Link Model for the Investigation of Musculoskeletal Disorder Hazards During Patient Handling. UWSpace. http://hdl.handle.net/10012/13682