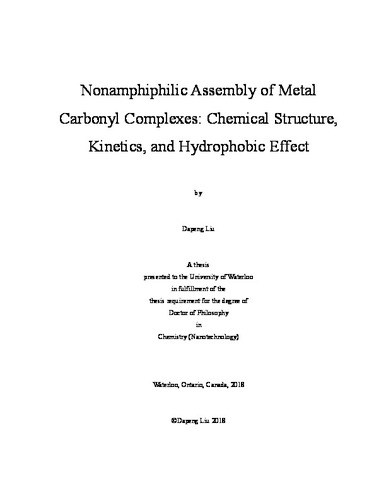 Self-assembly is an effective approach for the synthesis of various nanostructures. Assembly of amphiphilic molecules has been well developed, which are mostly thermodynamic controlled. Although the importance of kinetics and hydrophobic effect in self-assembly of biological molecules, such as proteins, has been well recognized, it remains to be challenging to understand these factors at molecular level. We have investigated the assembling behaviour of a few hydrophobic metal carbonyl polymers P(FpP) (FpP: CpFe(CO)2(CH2)mPPh2, m = 3 or 6) and small molecules FpC6X (Fp head = (PPh3)(Cp)Fe(CO)(CO-); C6X = hydrocarbon tail) in water. As a result, we were able to kinetically control the assemblies resulting in stable colloids in water with narrow size distribution and also gained fundamental knowledge on the hydrophobic effect at molecular level. The background of self-assembly is introduced in Chapter 1. It concludes that the assembly of non-amphiphilic molecules is less studied, but crucial for the understanding of biological supramolecular systems. Chapter 2 discusses the kinetic behaviour of hydrophobic homopolymer P(FpP) in poor solvents. We find that the kinetic pathways for the precipitation of P(FpP) is altered depending on the solution conditions. Kinetically trapped nanospheres and nanowarms with narrow PDI were produced. In Chapter 3, the assembly of P(FpP) in water is discussed. It is found that the rigidity of the backbone is a parameter determining the assembling morphology. With increasing the flexibility, the macromolecules assemble into lamellae, vesicles and irregular aggregates. As discussed in chapter 4, the vesicles formed in water do not have traditional bilayer membrane structure, which can swell upon the addition of THF. The swollen vesicles are colloidal stable and their PDI remains narrow. In addition to P(FpP), Fp acyl derivatives with pyrene or azobenzene (FpC6Azobenzene and FpC6Pyrene) were synthesis for aqueous assembly. The assembly behaviour of FpC6Azobenzene, as influenced by the balance of aromatic interaction and hydrophobic effect of pyrene, is discussed in chapter 5. In DMSO/water or methanol/water systems, aromatic interactions are predominant and drive the assemble into lamellae, while in a THF/water system. hydrophobic effect drives the assembly into vesicles. The role of hydrophobic effect in solution behaviour of the assembled vesicles is discussed in Chapter 6. we find that the hydrophobic hydration of Fe in the MCsomes (aqueous vesicles of metal carbonyl complexes) can be detected by cyclic voltammetry and fluorescence quenching experiments. Moreover, the hydration can be adjusted by the chemical structures of tails as well as solution conditions, such as dilution and pH, which induces the hierarchical self-assembly of MCsomes. The research is summarized in Chapter 7.