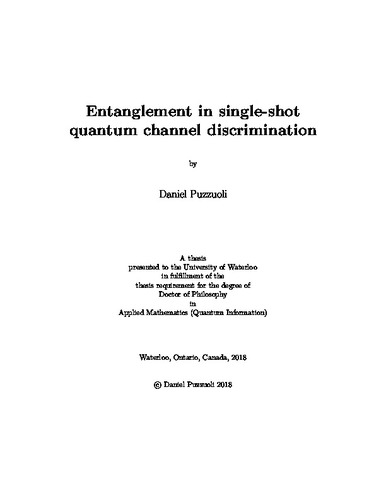 Single-shot quantum channel discrimination is the fundamental task of determining, given only a single use, which of two known quantum channels is acting on a system. In this thesis we investigate the well-known phenomenon that entanglement to an auxiliary system can provide an advantage in this task. In particular, we consider the questions: (1) How much entanglement is in general necessary to achieve an optimal discrimination strategy? (2) What is the maximal advantage provided by entanglement? Given a linear map Ψ : L(Cn) → L(Cm), its multiplicity maps are defined as the family of linear maps Ψ ⊗ 1L(Ck) : L(Cn ⊗ Ck) → L(Cm ⊗ Ck), where 1L(Ck) is the identity on L(Ck). Due to the Holevo-Helstrom theorem, the optimal performance using an auxiliary system of dimension k is quantified in terms of the norm of Ψ⊗1L(Ck), where Ψ is a linear map that depends on the parameters of the discrimination problem. Hence, the advantage provided by entanglement is represented in the growth of the norm of Ψ ⊗ 1L(Ck ) with k, a classic phenomenon in the theory of operator algebras. We formalize question (1) by investigating, relative to the input and output dimensions of the channels to be discriminated, how large of an auxiliary system is necessary to achieve an optimal strategy. Mathematically, this is connected to when the norm of Ψ ⊗ 1L(Ck) stops growing with k. It is well- known that an auxiliary system of dimension equal to the input is always sufficient to achieve an optimal strategy, and that this is sometimes necessary when the output dimension is at least as large as the input. We prove that, even when the output dimension is arbitrarily small compared to the input, it is still sometimes necessary to use an auxiliary system as large as the input to achieve an optimal strategy. For question (2), we investigate, with respect to a fixed input dimension, how large the gap between the optimal performances with and without entanglement can be. Mathematically, this is quantified by the rate of growth of the norm of Ψ ⊗ 1L(Ck ) in k. It is known that matrix transposition has the fastest possible growth, and we prove that it is essentially the unique linear map with this property. We use this to prove that a discrimination problem defined in terms of the Werner-Holevo channels is essentially the unique game satisfying a norm relation that states that the game can be won with certainty using entanglement, but is hard to win without entanglement. Along the way, we prove characterizations of the structure of maximal entanglement, as measured according to the entanglement negativity, as well as relative to a large class of entanglement measures. We also give various characterizations of complete trace-norm isometries, and reversible quantum channels.