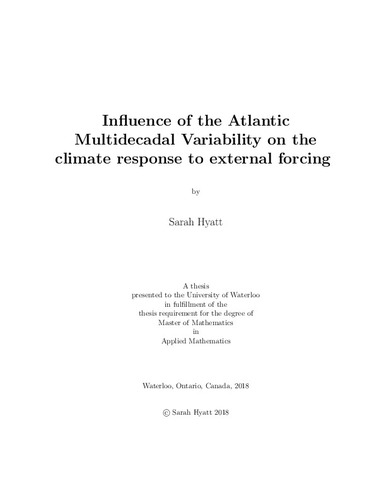 Internal climate variability has been found to influence the climate response to an external forcing such as CO2. This thesis investigates the influence of the Atlantic Multidecadal Variability (AMV), a mode of internal climate variability in the North Atlantic Ocean, on the response to external forcing. The AMV is a 60 - 80 year fluctuation in the sea surface temperatures of the North Atlantic that has widespread effects on climate. Using simulations run on an ocean-atmosphere general circulation model (GCM), it is found that the AMV phase significantly impacts the regional response to CO2: in the extratropical Northern Hemisphere, Eurasia warms more, and North America and the North Pacific warm less, in the warm phase of the AMV. The mechanisms of the AMV-related response are explored using a constructed circulation analog method. Changes in teleconnections between the tropical and extratropical Pacific contribute to the dynamical component of the difference in response to forcing between AMV phases, while differences in sea ice may contribute to the thermodynamic component. Interestingly, some aspects of the AMV-related response are robust with different external forcings. Finally, using simulations run on an atmospheric GCM, the role of sea ice in forcing atmospheric AMV-related anomalies is investigated. It is found that sea ice in the Barents and Greenland Seas plays a large role in forcing local temperature anomalies.