Can women have it all? The (in)compatibility of work and family in Kristine Bilkau’s Die Glücklichen and Maren Ade’s Toni Erdmann 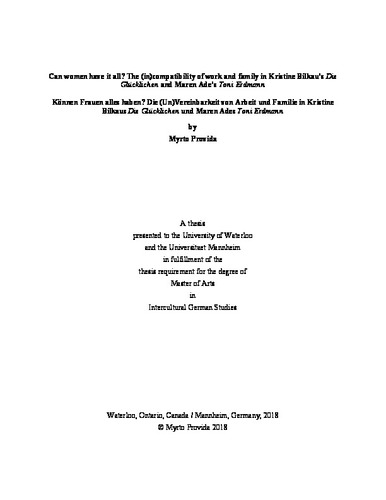 The aim of this thesis is to examine the portrayal of women in contemporary German literature and film against the backdrop of German public discourse on women in the first half of the 2010s. The works selected for this undertaking are Kristine Bilkau’s 2015 debut novel Die Glücklichen and Maren Ade’s 2016 film Toni Erdmann, both of which center (at least in part) on 30-year-old German women and the challenges they face in their personal and professional lives. By means of the analysis and the resulting observations, I argue that the female images constructed in these two works reflect those of recent public discourse and that both works highlight the compatibility of work and family – or lack thereof – as the thorniest issue for German women today. Utilizing a discourse analytical framework influenced primarily by the work of Rainer Keller while also drawing on Judith Butler’s concept of gender performativity, I first present an overview of German public discourse on women between 2010 and 2014. By focusing on the debates that dominated the public sphere during this time, most notably the establishment of a female quota on management boards, the gender pay gap, sexism in the workplace, as well as discourse on daycare facilities, I distill the female images projected by public discourse on these topics, e.g. the stereotypical masculinity of women managers (Lang and Rybnikova). In the subsequent analysis of the two selected works, I examine the portrayal of their respective female protagonists and dissect the interconnections between their work, family, and relationships, as well as their individual perceptions of what it means to be a woman. Finally, I compare the two sets of female images to assess to what extent public discourse has influenced the portrayal of the protagonists of these works. By means of this comparative analysis, I arrive at the conclusion that German public discourse on women in the first half of the 2010s directly influenced the female images constructed in both Die Glücklichen and Toni Erdmann. The protagonists of both works exhibit a number of traits attributed to women in recent public discourse, such as stress and time constraints, with the most correlations found between the portrayal of women managers in the quota debate and Toni Erdmann’s protagonist Ines, a business consultant. In addition, both the novel and the film are shown to attribute the challenges faced by their protagonists to the conflicting responsibilities stemming from work on the one hand and family on the other – a sentiment which echoes the portrayal of women in public discourse, where the duality of work and family was largely presented as being at natural opposition. These findings ultimately support the interplay between contemporary public and literary discourse and can be used as a springboard for further research in the fields of both German and gender studies.

Myrto Provida (2018). Can women have it all? The (in)compatibility of work and family in Kristine Bilkau’s Die Glücklichen and Maren Ade’s Toni Erdmann. UWSpace. http://hdl.handle.net/10012/13674