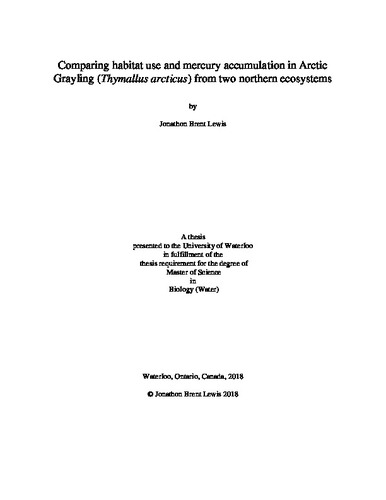 An improved understanding of the distribution and habitat requirements for mountain stream populations of Arctic Grayling (Thymallus arcticus) is necessary to assess their vulnerability to environmental stressors, establish thresholds for development activities, and evaluate population distribution trends over time. Life stage-specific habitat use may be a particularly sensitive indicator of environmental change, but baseline data is lacking, especially for young-of year (YOY) Arctic Grayling. Occupancy-based survey methods were used in the Little Nahanni River watershed in 2015 to quantify Arctic Grayling occupancy across the landscape. Data on a suite of associated habitat variables were also collected to explain YOY occupancy, and to relate to detection efficiency during field surveys, as detection efficiency is an often-neglected aspect of field sampling that affects our understanding of species-habitat relationships. Occupancy modelling has revealed that stream temperature (>8°C) and elevation (<1150 masl) best explain YOY occupancy in the Little Nahanni River. Increasing percent boulder substrate and percent riffle decreased the detection efficiency during surveys. By accounting for imperfect detection, my research helps to better quantify habitat that is important for a sensitive life stage of Arctic Grayling and establishes a baseline against which results from future monitoring efforts can be compared. Similar occupancy methods can be used by industry and regulatory organizations to increase standardization and efficiency of sampling in remote areas, and assess changes in Arctic Grayling distribution that may reflect changes in water quality and stream features. Abiotic and biotic habitat features can also affect bioaccumulation of contaminants, such as mercury, which have increased in remote northern regions since industrialization, bioaccumulating in fish tissues consumed by northerners. Given that mercury bioaccumulation is habitat-specific, differences in life history type and associated habitat features may affect mercury concentrations in populations of Arctic Grayling. I assessed differences in mercury bioaccumulation between fluvial Arctic Grayling in mountain streams and adfluvial Arctic Grayling in barrenland tundra streams. Overall, mercury bioaccumulation was higher in adfluvial Arctic Grayling from tundra barrenland streams compared to fluvial, mountain populations. Differences in mercury concentration between these populations of Arctic Grayling may be due to differences in methylation rates caused by a number of habitat factors, such as increased water temperatures, as well as differences in baseline methyl-mercury (MeHg) concentrations that may reflect a difference in foraging strategies by each respective population. As well, trophic interactions and the role of terrestrial prey items may influence mercury concentrations in fish tissue, however; further investigation is required to quantify these potential effects. All mercury concentrations in Arctic Grayling sampled during my study were below guidelines for human consumption of fish.