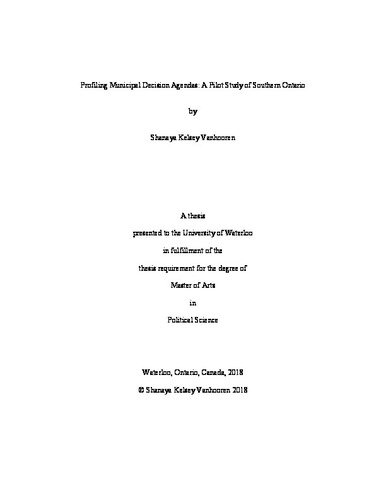 Canadian local governments have been consistently described as having a relatively limited role in policymaking. It has been argued in the local government literature that municipalities abide by the mandate imposed by provincial statutes, which primarily includes policies related to property, such as zoning decisions, and services to property, such as fire protection and sewage collection. Other scholars have argued that the role of local governments is expanding. For example, some argue that globalization has increased the importance of local governments and, indeed, there is evidence that local governments are beginning to independently address global problems, such as climate change. Moreover, rising property taxes suggest that municipal governments have an expanding, more demanding policy agenda. This thesis analyzes whether municipal governments are involved in areas of policymaking that are beyond their traditional mandate by conducting a content analysis of the municipal council meeting minutes of three Southern Ontario municipalities from 2015-2017 inclusive. The primary research question is to what extent are municipal councils in Southern Ontario considering policy decisions that are beyond their traditional mandate, as outlined in the local government literature? Municipalities vary greatly in size and previous research demonstrates that size has a significant influence on the scope and content of policymaking. Thus, this thesis also asks: does a municipality’s size influence the scope and substance of policy issues under consideration by the municipal council? The findings suggest that all municipalities, especially small and medium-sized municipalities, address policy areas that are beyond the traditional mandate described in the literature. In fact, over forty percent of all coded policy decisions pertained to issues that are not included in the literature’s characterization of municipal responsibilities. Furthermore, large municipalities address a substantively more diverse set of policy issues than small and medium size municipalities. However, large municipalities are not the only local governments making policies in areas considered traditionally ‘urban’. The findings also emphasize that further research is needed that investigates the function and prominence of constituent policy at the local level, as well as the explanations as to why these trends exist.