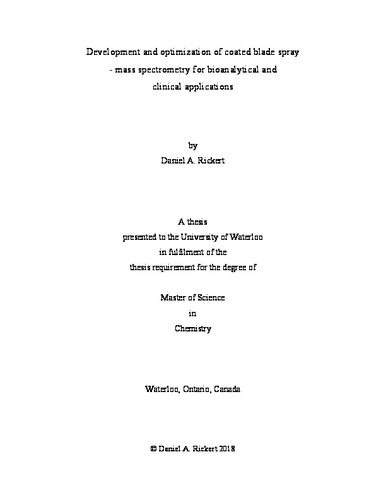 Bioanalysis is a sub-discipline of analytical chemistry that focuses on the identification and quantification of small and large molecules (e.g. metabolites and proteins) present in biological sample matrices (e.g. blood, urine, saliva, plasma, and tissue) that is concerned with measuring a biological state or condition. One of the challenges chemists face in bioanalytical applications when using conventional analytical procedures such as liquid chromatography coupled to tandem mass spectrometry (LC-MS/MS) is the inability to inject the raw sample directly into the instrument. As a result, sample preparation steps are required to isolate target analytes from the matrix components present in the sample, providing relatively clean sample extracts and reducing matrix interferences. The common limitation associated with the majority of the sample preparation techniques used in bioanalytical and clinical applications is their time-consuming nature. Thus, there is an urgent need of protocols that decrease the total analysis time. An alternative to these conventional procedures is a solid phase microextraction (SPME) based technology developed at the University of Waterloo that operates as an ambient mass spectrometry (AMS) device. Known as coated blade spray (CBS), it combines in a single device the extractive and pre-concentrative nature of SPME, with the ability to be directly coupled to mass spectrometry (MS) systems without the need for additional instrumentation (e.g. pumps, desorption chambers, heating systems). This thesis focuses on the ongoing development and optimization of CBS for quantitative analysis of small molecules in biofluids, as well as an assessment of the CBS platform for rapid therapeutic drug monitoring (TDM) of immunosuppressive drugs (ISDs) in whole blood. To date, this technology has been used only with Thermo Scientific mass spectrometers. Hence, the first objective was to demonstrate the suitability of this technology to effectively operate with MS instruments from different vendors (e.g. SCIEX and Waters). To achieve this, the experimental parameters of the CBS technology were optimized on an AB SCIEX API 4000 triple quadrupole and Waters XEVO G2-S hybrid quadrupole time of flight (QTOF) mass spectrometers, and the benchmark analytical performance of both instruments was established. Following the identification of the optimal CBS operating parameters, these conditions were applied for the concurrent analysis of fentanyl, and five fentanyl analogs from urine and plasma using the AB SCIEX MS. Excellent figures of merit were obtained from both matrices, with limits of quantitation for all compounds at 0.5 ng/mL or lower, with less than 60 s of total analysis time per sample. In the final data chapter, the suitability of the CBS platform for routine clinical analysis of four immunosuppressive drugs (ISDs) in whole human blood was investigated, and rigorously validated, using guidelines set by the International Association of Therapeutic Drug Monitoring and Clinical Toxicology (IATDMCT). The results verified that the optimized method was highly reproducible over a 10-day period, with total inter-day variation less than 5 % for all of the compounds at three different concentrations. The functional sensitivity of the method improved nearly 4 times from the preliminary proof of concept study published earlier this year by Gomez-Rios, et al. Likewise, a major decrease in analysis time, from 16 h to 2 h was achieved – besting the analysis times of automated immunoassays that are employed in clinical laboratories for routine analysis of ISDs. Finally, the concentrations of three immunosuppressive drugs in ~100 patient samples obtained using the CBS-MS/MS methodology were compared to the Abbot Laboratories i2000 ARCHITECT automated immunoassay system. Passing-Bablok regression analysis demonstrated significant statistical similarities between both methods. Bland-Altman plots identified minimal outliers, with some bias in the measurements that were consistent with other MS-based methods that were compared to immunoassays.