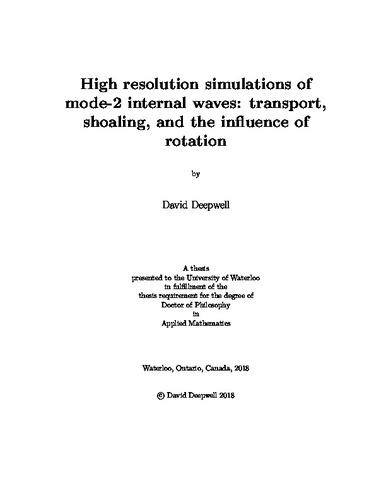 Internal waves are a universal feature in stratified flows. Of particular interest are Internal Solitary and Solitary-like Waves (ISWs) which may persist for long periods of time and travel great distances. In the ocean, ISWs are energetically dominated by mode-1 waves. The literature on higher modes, the second mode in particular, is less developed than that for the first mode. However, over the last decade multiple observations of the mode-2 ISWs have been made throughout the world's oceans which has lead to a renewed interest in studying the second mode in theoretical and practical applications. We present high resolution numerical simulations of mode-2 ISWs on a laboratory scale. We have used the pseudo-spectral model SPINS on the high-performance computing cluster SHARCNET. We have added diagnostics (specifically, energy budgets) into this model to help in reporting the accuracy and efficacy of an individual simulation. Laboratory experiments were also completed to make a comparison to particular numerical results. We are the first to use full three-dimensional numerical domains to study the generation and evolution of mode-2 ISWs in laboratory environments under various conditions. We present results for three specific experiments: the mass transport efficiency of a mode-2 ISW in a variety of stratifications, the adjustment of a mode-2 ISW in a channel influenced by rotation, and the interaction with topography during the propagation of mode-2 ISWs over an isolated ridge. Specifically, mass transport is primarily impacted by instabilities in the lee side of a mode-2 ISW which act to destroy the trapped core. However, specific stratification and Schmidt numbers are found to exist which can maintain the presence of the trapped core by inhibiting the lee instabilities. Rotation modifies the ISW into Kelvin waves and Poincaré waves while also creating a highly localized shear instability along the focusing wall. The first has been presented for mode-1 ISWs while the second is novel. The transit of a mode-2 ISW over a ridge is capable of inducting the loss of material from the core of the ISW when the interaction is strong while also inducing cross-boundary layer transport. In general, it appears that it is quite easy to perturb mode-2 ISWs such that their longevity is reduced.