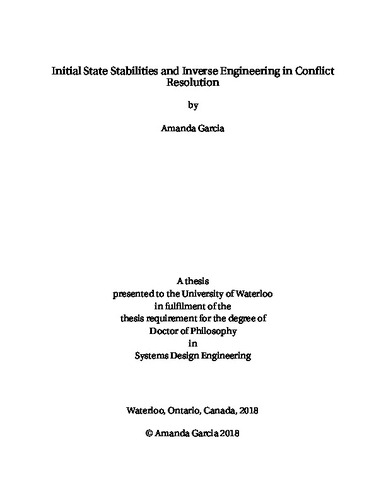 Two original contributions are made which extend the Graph Model for Conflict Resolution: one is a new family of solution concepts, while the other is a novel methodological approach. In addition to theoretical contributions, applications to complex energy problems are demonstrated; in particular, the consideration of the ongoing Trans Mountain Expansion Project is the first of its kind. The family of solution concepts, called initial state stabilities, is designed to complement existing solution concepts within the Graph Model framework by modelling both risk-averse and risk-seeking decision-makers. The comparison which underpins these concepts examines the consequences of moving from a given starting state to those of remaining in that state. The types of individuals modelled by these stability concepts represent a new class of decision-makers which, up until now, had not been considered in the Graph Model paradigm. The innovative methodology presented is designed to "inverse engineer" decision-makers’ preferences based on their observable behaviour. The algorithms underlying the inverse engineering methodology are based on the most commonly used stability concepts in the Graph Model for Conflict Resolution and function by reducing the set of possible preference rankings for each decision-maker. The reduction is based on observable moves and counter-moves made by decision-makers. This procedure assists stakeholders in optimizing their own decision-making process based on information gathered about their opponents and can also be used to improve the modelling of strategic interactions. In addition to providing decision-makers and analysts with up-to-date preference information about opponents, the methodology is also equipped with an ADVICE function which enriches the decision-making process by providing important information regarding potential moves. Decision-makers who use the methods introduced in this thesis are provided with the expected value of each of their possible moves, with the probability of the opponent’s next response, and with the opponent reachable states. This insightful data helps establish an accurate picture of the conflict situation and in so doing, aids stakeholders in making strategic decisions. The applicability of this methodology is demonstrated through the study of the conflict surrounding the Trans Mountain Expansion Project in British Columbia, Canada.