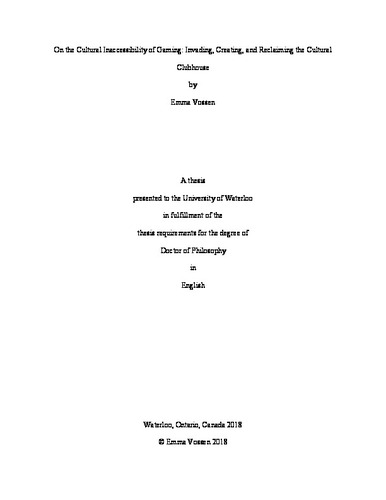 This dissertation uses intersectional feminist theory and Autoethnography to develop the concept of “cultural inaccessibility”. Cultural inaccessibility is a concept I’ve created to describe the ways that women are made to feel unwelcome in spaces of game play and games culture, both offline and online. Although there are few formal barriers preventing women from purchasing games, playing games, or acquiring jobs in the games industry, this dissertation explores the formidable cultural barriers which define women as “space invaders” and outsiders in games culture. Women are routinely subjected to gendered harassment while playing games, and in physical spaces of games culture, such as conventions, stores, and tournaments. This harassment and abuse is intensified toward female journalists, developers and academics who choose to speak publicly about sexism within the culture, particularly since the 2014 rise of Gamergate. This dissertation illustrates the parallel development of games culture and women’s continued exclusion from it, from the exclusionary sexism of J. R. R. Tolkien’s writing to the development of the “Gamer” as a fixed (and stereotypically cis-male) identity in the pages of video game magazines of the 1980s and ‘90s, to the online “Gamer activism” of today. At the same time, I also explore my own experiences as a female gamer and academic in the 2010s, using projects I have been a part of as a means of reflecting on developments in the broader culture. I first discuss a short machinima (a film made within a video game) that Elise Vist and I created within the 2007 Massively Multiplayer Online Role-Playing Game Lord of the Rings Online entitled Lady Hobbits. Lady Hobbits becomes an entry point to consider the historical cultural inaccessibility of women’s representations in seminal male-dominated media such as The Lord of the Rings. I then discuss the gender and games advocacy group that I co-founded at the University of Waterloo, The Games Institute Janes (GI Janes), and the many gaming events that we ran, comparing the experience of our gender-integrated and women-only game nights. The challenges I experienced organizing GI Janes fuels my analysis of the cultural inaccessibility of game play for girls and women, as demonstrated by the tangled gender dynamics at play in the eSports community and Super Smash Brothers fandom. Lastly, I discuss my experiences as a staff member, and eventual first female editor-in-chief, of game studies publication First Person Scholar (FPS). This chapter interrogates the cultural inaccessibility of writing and publishing about games for women in the academic field of game studies, and the ways in which game studies’ links to gamer identity replicate games culture’s troubling sexism. The dissertation concludes with a discussion of the more recent connections between games culture, Gamergate, and conservative political groups such as the Alt-right. The conclusion asks how women can study games culture and the politically-motivated violence with which it is has recently been linked if doing so puts us at risk of becoming a target of harassment and abuse. It underscores the importance of future social justice-oriented work in academia and at large. In summary this dissertation moves from examining the historical inaccessibility of representation and participation (chapter 2), to the inaccessibility of game play (chapter 3), to the inaccessibility of participation in the discourse of games culture (chapter 4), before finally moving to a conclusion about Gamergate and politics in 2018 and how cultural inaccessibility has become a problem that is much larger than just games culture (chapter 5).