Exploring the Benefits of Multisensory Exposure on Early Sensory-Specific Processing 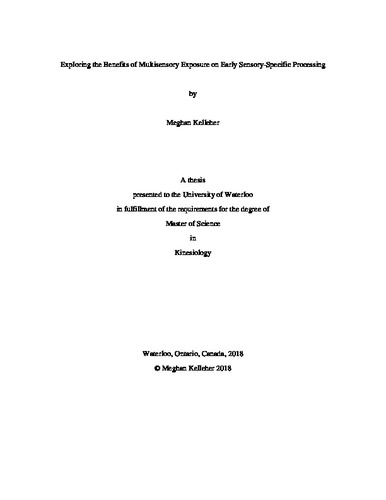 Multisensory training can improve perceptual learning, exhibited by changes in accuracy, precision and response time (Forster, Cavina-Pratesi, Aglioti, & Berlucchi, 2002; Forster, Sambo, & Pavone, 2009; Giard & Peronnet, 1999; Murray et al., 2005; Pasalar, Ro, & Beauchamp, 2010; Teder-Sälejärvi, Russo, McDonald, & Hillyard, 2005). Recently, researchers have even demonstrated improvement in perceptual learning during a subsequent unisensory environment (Kim, Seitz, & Shams, 2008; Seitz, Kim, & Shams, 2006; Von Kriegstein & Giraud, 2006). This stems from increasing evidence supporting the involvement of unisensory structures during multisensory interactions. That said, it remains to be determined the exact role these areas play, and how they may be modulated during multisensory interactions. This thesis intends to further enrich the current understanding surrounding the influences of multisensory interactions, on the componentry low-level unisensory representations. It was hypothesized that a single session visual-somatosensory training intervention, would improve subsequent somatosensory perceptual performance; characterized as a decrease in reaction time. While mechanisms can only be speculated with the current knowledge, one plausible explanation could be the modulation of unisensory representations resulting from the multisensory exposure. Thus, it was proposed that evidence of early neuroplastic adaptation would be exhibited by the late stage of training. In an attempt to examine such modulations, electroencephalography was used to measure event-related potentials, time-locked to multisensory stimuli delivered during training. Subjects (n=12) were delivered faint, but above threshold vibrotactile stimuli to the fingertips of digits 2 or 5, or index and pinky fingers respectively. Baseline and post-intervention reaction time were tested by asking subjects to identify and discriminate which digit received a vibrotactile stimulus, and responded using a corresponding button press. During training, vibrotactile stimuli were accompanied by congruent visual light, delivered by light-emitting diodes. Once again, subjects trained to identify, and discriminate stimuli delivered, responding as quickly and accurately as they could using a button press. Overall, a significant reduction in somatosensory reaction was displayed in post-intervention testing, compared to baseline measures. While no significant change in ERP amplitudes were exhibited across any of the examined components, a visual decrease from early-training amplitude was seen at the latency of N140, during late-training. This visual decrease could relate to a change in early somatosensory processing efficiency; whereby secondary somatosensory structures require less involvement. Without future investigations examining changes in early ERP components (ie. P50) during this paradigm, this interpretation remains purely speculation. It would also be strongly beneficial to examine changes in cortical excitability of early somatosensory representations prior to, and following the completion of multisensory training.