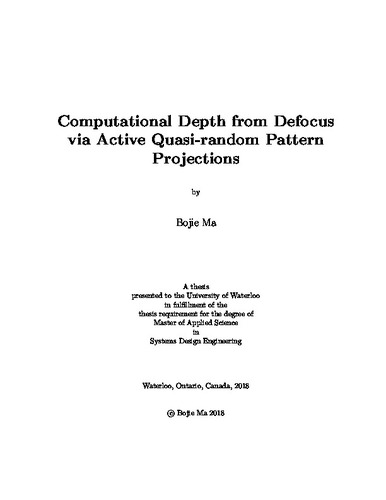 Depth information is one of the most fundamental cues in interpreting the geometric relationship of objects. It enables machines and robots to perceive the world in 3D and allows them to understand the environment far beyond 2D images. Recovering the depth information of the scene plays a crucial role in computer vision, and hence has a strong connection with many applications in the fields such as robotics, autonomous driving and computer-human interfacing. In this thesis, we proposed, designed, and built a comprehensive system for depth estimation from a single camera capture by leveraging the camera response to the defocus effect of the projected pattern. This approach is fundamentally driven by the concept of active depth from defocus (DfD) which recovers depth by analyzing the defocus effect of the projected pattern at different depth levels as appeared in the captured images. While current active DfD approaches are able to provide high accuracy, they rely on specialized setups to obtain images with different defocus levels, making it impractical for a simple and compact depth-sensing system with a small form factor. The main contribution of this thesis is the use of computational modelling techniques to characterize the camera defocus response of the projection pattern at different depth levels, a new approach in active DfD that enables rapid and accurate depth inference in the absence of complex hardware and extensive computing resources. Specifically, different statistical estimation methods are proposed to approximate the pixel intensity distribution of the projected pattern as measured by the camera sensor, a learning process that essentially summarizes the defocus effect to a handful of optimized, distinctive values. As a result, the blurring appearance of the projected pattern at each depth level is represented by depth features in a computational depth inference model. In the proposed framework, the scene is actively illuminated with a unique quasi-random projection pattern, and a conventional RGB camera is used to acquire an image of the scene. The depth map of the scene can then be recovered by studying the depth feature in the captured image of the blurred projection pattern using the proposed computational depth inference model. To verify the efficacy of the proposed depth estimation approach, quantitative and qualitative experiments are performed on test scenes with different structural characteristics. The results demonstrate that the proposed method can produce accurate depth reconstruction results with high fidelity and has strong potential as a cost effective and computationally efficient mean of generating depth maps.