Gender Interplay in Nonnos' Dionysiaka: The Cases of Deriades and Aura 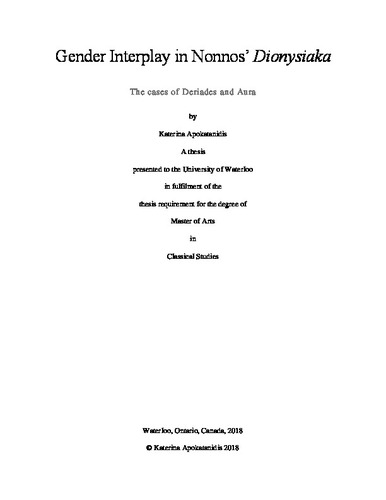 This thesis presents the relation between the gendered language of Nonnos and the ironic undertones he employs to describe two main plot points in the Dionysiaka. I focus on Dionysos’ battle with Deriades, the Indian king, and Aura, the titan goddess of the breeze. In my first section, I argue that the irony employed to describe the death of Deriades is based on misperceptions of gender identity as he understands the world. Due to his fixity on the masculine extreme of the gender spectrum, Deriades has created a skewed view of the world which led to his demise by the gender-fluid Dionysos. His false perception is reflected in the text when Athena disguises herself as Morrheus, Deriades’ son-in-law, and comes to taunt him for fleeing the battle with Dionysos. Athena is herself a gender-fluid goddess as the masculine virgin goddess of Truth/Wisdom. Her disguise symbolises the loss of true understanding. For my second section, I examine the implications of the total loss of gender identity as experienced by Aura. Her identification as a masculine female skews her perception of the world and results in committing a crime of hubris against Artemis. Her masculinised persona leads her to become the voyeur of Artemis. Artemis herself is a gender-fluid goddess due to her masculine attributes as huntress. But she is mainly the goddess of female sexuality and its potential to produce life. Aura’s crime against Artemis is symbolically a crime against femininity itself. Her punishment for her voyeurism is to be raped by Dionysos and become a mother. Motherhood symbolises the realisation of femininity which Aura despises. Yet her rape is not the only punishment she receives. Indeed, I argue that her punishment also includes becoming the voyeur of herself and then becoming the object of voyeurism for eternity when she is turned into a spring.