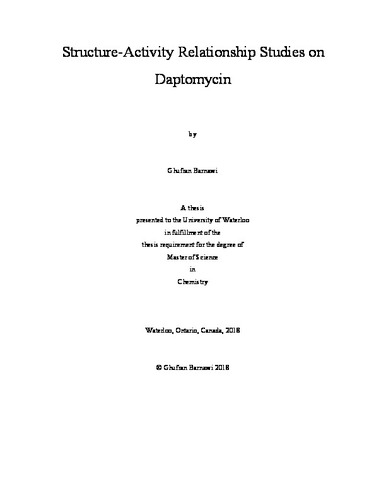 Daptomycin (Dap) is a Ca2+-dependent cyclic lipodepsipeptide antibiotic used for treating skin infections caused by Gram-positive pathogens. It is also used to treat endocarditis caused by Staphylococcus aureus including methicillin-resistant S. aureus (MRSA). The mechanism of action (MOA) for Dap is still somewhat unclear. Thus, the MOA for Dap has been a focus of considerable study, and many MOAs have been proposed. Nevertheless, a considerable amount of evidence has been amassed that suggests Dap binds to bacterial cell membranes and forms oligomeric pores that allow for the passage of small cations. This results in the depolarization of the cell membrane and cell death. The first goal of this study was to identify the contribution of each amino acid in Dap to its biological activity and membrane affinity. This was achieved by performing an alanine scan on an active Dap analog, Dap-E12-W13, whereby each residue was replaced with alanine through chemical synthesis. The antibacterial activity of the alanine analogs was determined against Bacillus subtilis. These studies revealed that positions 2, 6, and 11 are amenable to substitution. These studies, in conjunction with those performed earlier on Dap, also suggested that position 8 is amenable to substitution as long as the correct stereochemistry is maintained. Membrane binding studies using model liposomes revealed that the position 2, 6 and 11 analogs were able to interact with membranes in a manner very similar to that of the parent peptide Dap-E12-W13, in that they did not require high concentrations of calcium to achieve maximal membrane binding. This was in contrast to the other Ala mutants which required much greater than physiological Ca2+ ion concentrations to achieve maximal interactions and good biological activity. The second goal of this study was to create one or more Dap analogs that have activity equal to or greater than that of Dap, with the long-term goal of creating a Dap analog that is active against resistant bacterial strains and in the presence of lung surfactant. Towards this end, Ser11 of an active Dap analog, Dap-K6-E12-W13, was substituted with 17 common amino acids. Although none of the resulting analogs were more active than Dap, these studies revealed that position 11 was amenable to substitution with positively charged amino acids (His, Arg, Lys) as these substitutions resulted in either no or minimal loss of activity. Moreover, the Asn, Thr, Cys, Met and Gly analogs were also relatively active being only 2.7-fold less active than Dap-K6-E12-W13 at 1.25 mM Ca2+.