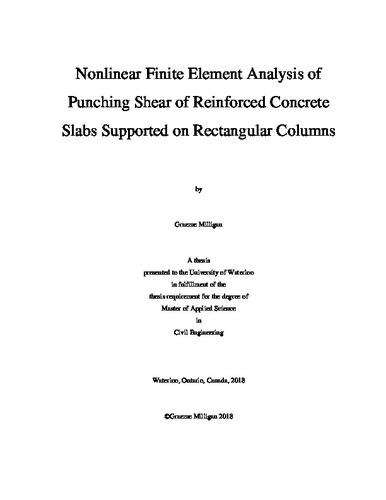 Historical and current design code provisions for the punching shear of reinforced concrete slabs supported on rectangular columns vary greatly and are primarily based on empirical results. Additionally, the existing database for slabs supported on rectangular columns is quite small compared to the empirical database for reinforced concrete slabs supported on square columns. Conducting experimental tests of slabs supported on rectangular columns can be quite expensive and time consuming due to the required specimen size. As such, properly calibrated finite element simulations can be useful to expand the existing database and verify the accuracy of code provisions. In this thesis a three-dimensional nonlinear finite element analysis (FEA) of interior slab-column connections subjected to concentric vertical loading, in the commercial FEA software ABAQUS, is presented. The finite element model was calibrated following the calibration procedure described in Genikomsou (2015), which was focused on the FEA of punching shear of slabs supported on square columns. Slab AM04, which was a slab tested by Sagaseta et al. (2014), and which represents an interior slab-column connection with a column rectangularity (aspect ratio) of three is considered as the control specimen in the calibration. The calibration was then verified by modelling the three remaining slabs in the AM series and three additional slabs tested by Sagaseta et al. (2011). These additional slabs were supported on square columns and had different concrete strengths and flexural reinforcing ratios than the AM series slabs. The calibrated finite element model (FEM) was found to be able to accurately predict the load deflection response and crack patterns of the tested slabs. The calibrated FEM was then used to conduct a parametric study on the impact of column rectangularity on the punching shear behaviour of interior slab-column connections. Based on a comparison of current and historical code provisions two parameters, the column aspect ratio, and the ratio of the length of the minimum column dimension, cmin, to the effective flexural depth of the slab, d, were considered in the parametric study. In total 77 simulations spanning 8 cmin/d ratios were conducted. The results of these 77 simulations demonstrated that the impact of column rectangularity is not independent of the cmin/d ratio. As the cmin/d ratio increased the impact of column rectangularity predicted by the FEM, Eurocode 2 (2004), Model Code 2010 and the Critical Shear Crack Theory (CSCT) became more severe. Predictions according to ACI318M-14 were nearly independent of the ratio of cmin/d and were typically unconservative compared to the FEM results for cmin/d ratios greater than approximately 1.3. Additionally, the FEM, Eurocode 2 (2004), Model Code 2010 and the CSCT predicted an impact of rectangularity for column aspect ratios between 1 and 2, which differs from the current ACI 318 provisions. The shear stress distributions in the slab along the support perimeter were also analyzed. Shear stresses were found to concentrate near the corner of the supported area and along the short side of the supported area. As the cmin/d ratio increased these concentrations became more focused at the column corner.