Representations of Violent Women in Popular Culture and World Politics: The Mothers, Monsters, Whores, and Penitents of Young Adult Fantasy 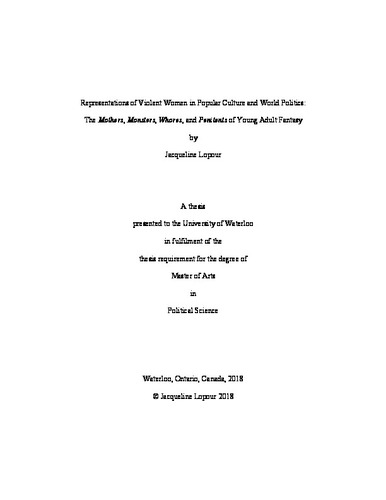 As young adult fiction has surged in popularity over the past decade, a popular new sub-genre has emerged. These novels feature high-fantasy stories with young female heroines who are fighters, assassins, spies, and rebel leaders. In this paper, I argue that representations of women’s violence in these stories have implications for global politics. Although these young-adult heroines are intended to serve as examples of female empowerment, the characters reflect dominant social, academic, and political narratives that depict violent women as either mothers, monsters, or whores (Sjoberg and Gentry 2007). Into this conversation I introduce a fourth narrative, that of penitent, which portrays women's political violence as an unnatural, transitional state to be ultimately rejected. This paper explores how three bestselling young adult fantasy series engage with these narratives and argues that—despite their feminist intentions—these novels reflect, reinforce and strengthen gender subordinating narratives that undermine the agency of violent women.