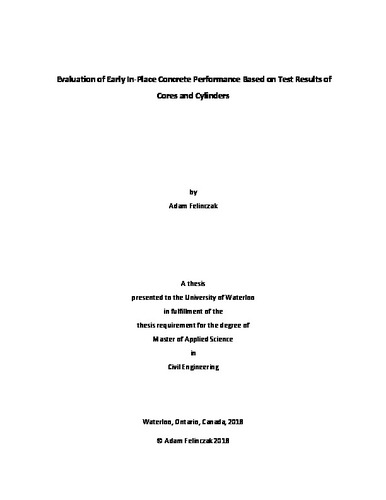 The evaluation of in-place concrete performance, relating to its mechanical properties, continues to remain a challenge for engineers and researchers, but is essential for determining the safety of a structure and from the client’s perspective, necessary for ensuring adherence to specified quality. The results of testing standard concrete cylinders provides a limited indication of the performance of a structure, due to both the different placement and compaction procedures, as well as the variable conditions caused by both temperature and moisture content during concrete hydration. Therefore, a correlation between the performance of a structure and the results of concrete cylinder testing is open to question. Cores, which are samples drilled from the concrete structure, can provide a more accurate estimate of the in-place concrete properties and indicate defects resulting from construction techniques and environmental conditions during curing. However, core testing is typically completed only following low results from standard compressive testing of cylinders on day 28 after casting. Increasing social and economic pressures for constructing highway infrastructure more quickly poses a challenge for using concrete in rapid construction, since it is often specified by its 28 day properties. If the early in-place concrete performance can be evaluated through core testing as early as 3 or 7 days after casting for acceptance of the in-place concrete, construction and production sequencing can be improved in both cast-in-place concrete and precast concrete plants. Extracting cores at earlier ages is not common practice, as it is evident from the limited amount of research data available on early age concrete coring. However, many modern high-performance concretes undergo most of their hydration and strength growth more quickly than in the past allowing the possibility of extracting and testing cores earlier. The experimental component of this research included testing and evaluating cores extracted on days 3, 7, and 28 from structures constructed in the University of Waterloo laboratory and structures constructed in prefabrication plants. The cores were evaluated for compressive strength, rapid chloride permeability, electrical bulk resistivity, density, and air void system to develop an understanding of the behaviour of the concrete in the structure during the early stages of concrete hydration until day 28. The laboratory structures included two sets of beams and one set of girder webs. The beam sets consisted of one low strength (design strength of 30 MPa) and one high strength (design strength of 50 MPa) concrete and were designed to replicate large beams or pier caps in bridge infrastructure. Cores were extracted vertically from the top and horizontally from the mid-height of the beams to evaluate the two alternatives of extracting cores in similar bridge elements. The girder webs were constructed to replicate large girders used in bridges and cores were extracted near the top and bottom of the webs to determine the variation along the height. The prefabricated structures included one girder web, one complete girder, and one valve chamber, each from a different precast concrete plant. The concrete mixes used in each of the prefabricated structures resembled those used in bridge elements typical to Ontario and cores were extracted along the height of the structures to determine the variation in concrete performance along the height. Based on the experimental results, it is concluded that it is acceptable to extract and test cores as early as day 7 for all concretes and, for the high strength concretes, as early as day 3. For day 7 coring and testing, the compressive strength of the cores were at least 90% of the day 28 cores and exceeded the specified 28 day design strength. The day 7 electrical resistivity was approximately 70% of its 28 day value. A comparison of the strengths of cores and cylinders from the prefabricated structures indicates that the cores have, on average, 90% of the cylinder strength on both day 3 and day 28. The horizontal cores from the mid-height of the beams had compressive strengths 10% higher than those of the vertical cores, due to reduced compaction and hydration experienced in the top section of the beams. There was little difference in compressive strength and bulk resistivity along the height of the web of laboratory-cast girders on each testing day. However, due to large variation in the results of prefabricated structures, errors in the data, and missing information on days 3 and 7, no conclusions were drawn for the variation along the height at early age. A linear correlation was observed between the results of rapid chloride permeability and the electrical resistivity. Thus, it is recommended to use the easier technique of measuring electrical resistivity in place of the rapid chloride permeability test. Using the established relationship, values for electrical resistivity relating to rapid chloride permeability limits in Ontario standards were recommended.