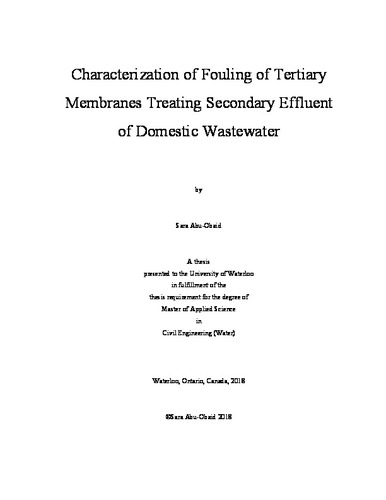 The use of membranes for tertiary treatment of wastewater has become more frequent over the years, especially with increasing interest in water reuse. Fouling prevents wider application of this technology as it creates operational challenges and increases costs. In tertiary applications, membrane feedwater can be variable in composition as this depends on the operating conditions of the implemented upstream biological treatment process. The tertiary membranes at the Keswick WPCP have demonstrated increased fouling in the spring season. Early spring marks the period that corresponds to low wastewater temperatures and elevated flows. This study sought to identify critical operating conditions leading to seasonal fluctuations in fouling of full-scale tertiary membranes. This was done through conducting a detailed historical review of membrane operational parameters for the year of 2016 and 2017. In addition, changes in potential foulants during high fouling periods were examined to obtain an improved understanding of the foulant characteristics. This was done through a sampling campaign that spanned multiple seasons of operation aiming to characterize feedwater quality during extreme operational conditions. The analysis of historical data revealed a relationship between membrane fouling and water temperature and flow, which was more than could be explained by changes in water viscosity with temperature. However, it was observed that the membrane fouling behavior significantly differed between the two year-long observation periods, with a peak in fouling indexes during March and April for 2016, and inconsistent fluctuations in fouling indexes between January and May for 2017. The differing patterns suggested a complex dependence of fouling on the operating conditions. Therefore, it was concluded that fouling depends on water temperature and flow, however, it was not possible to delineate the contributions of the individual variables as they were found to be highly correlated. The examination of feedwater characteristics data revealed that high membrane fouling rates correlated to an increase in biopolymer concentration of total DOC. The increase in biopolymer concentration was also correlated to a decrease in water temperature and increase in flow. However, no relationship was observed between TOC/DOC concentrations and temperature and flow. This could indicate that fouling of tertiary membranes due to seasonal variation in operational conditions is a result of alterations to the composition of organics in membrane feed, not the overall concentration of TOC/DOC. The examination of field data also revealed an increase in CST values during high fouling events. The increase in CST values correlated to the decrease in water temperature and increase in flow. Elevated CST values, which indicate worsened dewaterability of sludge, also correlated to higher biopolymer concentrations. Therefore, it was concluded that seasonal variations may result in the increased release of EPS by microorganisms. This leads to higher membrane fouling and worsened dewaterability of upstream sludge. The results of this study enhance the knowledge of fouling behaviour and foulant characteristics for tertiary membranes operating under stressed conditions. This knowledge will be of value when designing mitigation strategies to reduce the costs of these types of systems.