Institutions, Theology, and the Language of Freedom in the Poetry and Prose of John Milton 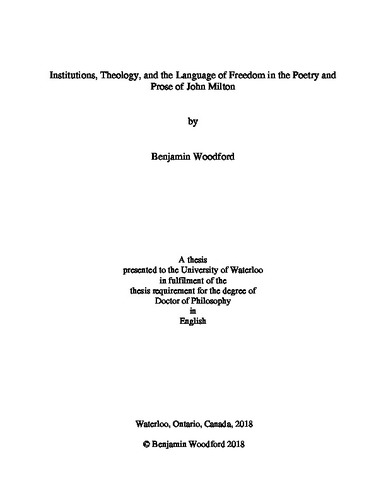 Freedom is an essential topic in the writings of John Milton, but what he means by this term varies over the course of his career. Milton’s prose works centre on religious and political liberty, which explore how the church and state interact with Christians and citizens. His early prose tracts express skepticism about the contributions of institutions, particularly coercive institutions, to freedom. As the English Revolution progresses, Milton begins to separate religious and political liberty based on the role of institutions in each type of freedom. In Milton’s commonwealth and late prose, religious freedom protects the individual conscience from being coerced by any civil or ecclesiastical institution; institutions are limited to persuasion and admonition in religious matters. Political freedom, in contrast, involves parliament leading, schools educating, and the army compelling the English people so that they accept a commonwealth, as political freedom is only possible in a commonwealth. Although these institutions often act against the will of the electorate, Milton’s language presents them as expressions of popular sovereignty. In his epic poem Paradise Lost, Milton shifts the setting from England to the mythical realm of heaven and presents an additional dimension of liberty. Paradise Lost incorporates much of the language regarding freedom and institutions from Milton’s prose, but it expresses a theological freedom that focuses on a Christian’s relationship with God. Theological freedom involves both free choice and dependence on God. Milton uses the character God to articulate the principles of theological freedom, and the characters Satan and Adam and Eve to illustrate failures in theological freedom. These failures shake the reader’s confidence, but the poem ends with the restoration of freedom, encouraging the reader to accept freedom through dependence on God.

Benjamin Woodford (2018). Institutions, Theology, and the Language of Freedom in the Poetry and Prose of John Milton. UWSpace. http://hdl.handle.net/10012/13613